The Politics Of Fashion At The Met Gala 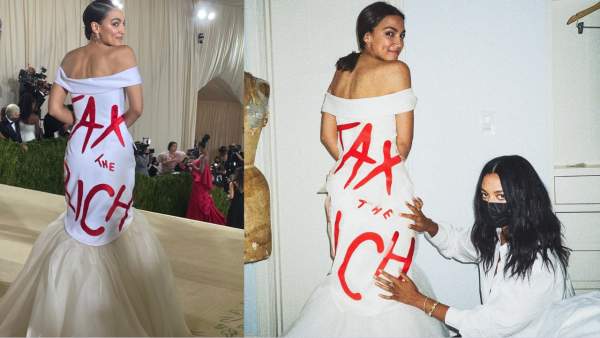 Last week’s annual Met Gala has been the talk of the world. The world got together to rank the 1% from the best dressed to why- does-Kim-Kardashian-look-like-my-anxiety dressed. This time we saw the celebrities completely owning the red carpet with not just their outfits but also with the political statements that they were making through it. From Cara Delevingne’s outfit saying “Peg the Patriarchy '' to Den Levy’s pro-LGBTQ+ look showing two men kissing, social media platforms were filled with the audience discussing who understood this year's Met’s assignment right. But the look that has still got people talking, including myself, was Alexandria Ocasio-Cortez's "Tax the rich '' gown.

So what is the Met Gala? Met Gala, also known as the “Oscars of the fashion industry” is a fund-raising event for the Costume Institute of the Metropolitan Museum of Art. Chaired by the editor of the renowned Vogue magazine, Anna Wintour, it is considered an extravagant event for fashion. There’s a different theme every year, like 2019’s “Camp: Notes on Fashion” or 2018’s “Heavenly Bodies: Fashion and the Catholic Imagination”. The celebrities are supposed to dress according to each year’s theme. However, what happens inside the Met is still a secret. Posting the insides of the event on social media by the guests is forbidden. The only bit available to the world is the red carpet one. Most of the celebrities are invited and don’t have to pay for the tickets, but anyone who wants to experience the party from within can pay $30k or sell their organs for the ticket.

Coming back to fashion and political statements, this year’s Met Gala theme was “American Independence”. Every celebrity brought with them a different outlook on what this theme meant for them. They chose to wear what they believed in, whether they preach it or not is a different matter.

Taylor Swift, one of the most renowned singer-songwriters once said, “A man does something, it's strategic, a woman does the same thing, it's calculated; a man is allowed to react, a woman can only overreact.” So when the congresswoman Alexandria Ocasio-Cortez wore a gown blaring “Tax the rich” in red on it, everyone jumped on the bandwagon to call this an act of “Performative Activism”. So what does this term mean? A simple way to understand what performative activism means is to open your Instagram app and look for the people who will post “#PartyNight” ten seconds after they post a black screen with the caption, “Black Lives Matter”. Performative activism is a “form of activism used to increase one's social capital or personal gain rather than genuine support towards a movement, issues, or causes.”

This means that the people who display performative activism do not genuinely care about the issue, they will either support it to act “woke” or to avoid any criticism that might come their way if they don’t. Their “support” is only limited to their respective social media platforms. Have you ever noticed how every product suddenly becomes full of rainbows in June? Or when Kendall Jenner tried to end racism with a can of Pepsi? (Watch here) Or when you saw black squares everywhere on social media a week after George Floyd's death? Do you ever wonder if they still care if black lives matter or did it only last while it was trending?

Now before we AOC’s acts as performative activism, let’s look at some of the things that she’s managed to achieve over the years. She was a working-class woman who used to work two jobs to make the ends meet. So she, out of all of the people, knows the problem of unemployment. She advocates for paying wages to interns and herself pays all her interns no less than $52,000 a year. She has drafted as well as proposed the Green New Deal which plans to reduce greenhouse gases up to half by 2030. She had approached Gilead's CEO to reduce the prices of HIV-drug in the US. She’s fought for the health and the civil rights of the members of the LGBTQ+ community. She visited the immigrant detention camps in Texas and spoke up about the sufferings of the migrants that gained a lot of attention. Her social media presence is one of the things she’s prominently known for. She has actively clapped back at people with her work who have tried to defame her. She managed to stop Amazon from building its headquarters in Queens by calling them out on their “corporate greeds” with just some tweets. Her social media presence has been so amusing that she was also asked to teach social media to Congress. She has constantly threatened the rich by proposing agendas that have been against the rich and benefit the underprivileged. She has fought for tuition-free education. She had even made Mark Zuckerberg, the co-founder, and CEO of Facebook, stumble over words and look for tissues. She has constantly talked about and advocated taxing the rich. In 2019, she even proposed a 70% tax on the ultra-rich people earning more than 10 million dollars.

So all the people claiming that walking in an event full of rich people that costs $30k for tickets is a little sanctimonious, think about it again. Keeping in mind that AOC was invited and didn't pay for the tickets, what better place to wear “Tax the Rich” if not a party full of richlings? It might even be a bold move.

But despite all of that it’s important to keep in mind that what AOC has achieved is a part of her job as a politician. They should not be put on a pedestal for doing their jobs properly. As citizens, we must appreciate them for efficiently doing their jobs but we mustn't preach them. Treating politicians as Gods has already created an invisible line between people and digging the line deeper will only result in an humanitarian crisis that has only ever benefited the egos of powerful men.

AOC wanted us to talk about taxing the rich, and in some way, she did achieve that. If our focus is still on the dress and not the message then maybe it’s time to introspect about the things we believe in. Meanwhile, every minute we spend talking about the dress creates a gap from where another rich person will get away with exploitation and not paying taxes.

Written with so much wit and intellect, love this

Amazing article, you handled such complicated concepts so efficiently!