The Woe Tale Of Gadia Lohars 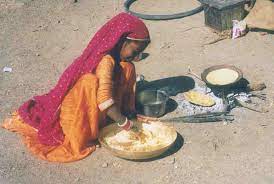 Hailing from the royal lands of Rajasthan, the Gadia Lohars-a community of blacksmiths- now live on the fringes of civilization. Dotted across the national capital, about 58 Gadia Lobar settlements work in Delhi alone. Historically considered a nomadic tribe, the Gadia Lohars have had a gruelling journey since they left the sands of Chittorgarh in Rajasthan.

Legend has it that the Gadia Lohars worked as blacksmiths in Chittorgarh around the 16th century under Rajput King Maharana Pratap. They were considered skilled artisans are making shields, swords and other weapons for the king's army. Toward the end of the 16th century, the Mughals invaded Chittorgarh, and Maharana Pratap and his subjects left the city. The blacksmiths took an oath before the king that until the army reclaims the fort, they would not come back home, not sleep on cots or light lamps at night. Over time, meanings and associations have changed in various aspects of this community.

Post-Independence, Pandit Jawaharlal Nehru, India's first Prime Minister, met the Gadia Lohars at the Chittorgarh Fort and urged the community to return to their land of origin. He assured them that with India's Independence, the fort was free too. But the community continued with their nomadic lifestyle and settled in Delhi, Gujarat, Haryana, Madhya Pradesh, Maharashtra, Punjab and Uttar Pradesh. In Delhi, the Gadia Lohars have had over 90 'informal settlements' for several decades, according to a report published by Housing and Land Rights Network (HLRN) in Delhi. Another statement said that despite being settled in Delhi for several decades, most settlements had not been surveyed or recognized by the Delhi government or Delhi Urban Shelter Improvement Board. Today they live alongside the roads or pavements to run their trade and do not have the necessities, and they constantly live in dread of being evicted.

The State government's policy of "Jahan Jhuggi Wahi Makan" (where there is a temporary house, there will be a permanent one) failed the expectations of the dwellers. Sanjay Gadia Lobar, a 35-year­ old Lobar from Dhaka village in Delhi, said this promise would remain hollow. "How will they construct permanent houses in place of these dingy-shanty jhuggis? There is no space here," said Sanjay, whose family has been residing in Dhaka village for almost 40 years. "When any of us has an upset stomach, 1t becomes very difficult even to walk for a few minutes to the public toilet. It closes at IO p.m.," said Sita, Sanjay's wife. "We always go in groups of two or three. It is very unsafe and unhygienic, but we don't have an option," said Kajal, a 22-year-old girl from the community.

Their safety, too, is at stake. Sanjay recounted that one morning & his wife and his younger sister were readying the shop for the day when they were hit by a vehicle. His sister died, and his wife suffered severe injuries. The Gadia Lohar fight daily for a hand-to-mouth existence and claim to live by God's will. I have done this ancestral work which is enough. I want my children to study and become better than me and unlike us. Live a life of dignity and respect," said Sanjay.

The burning issue of charcoal workers