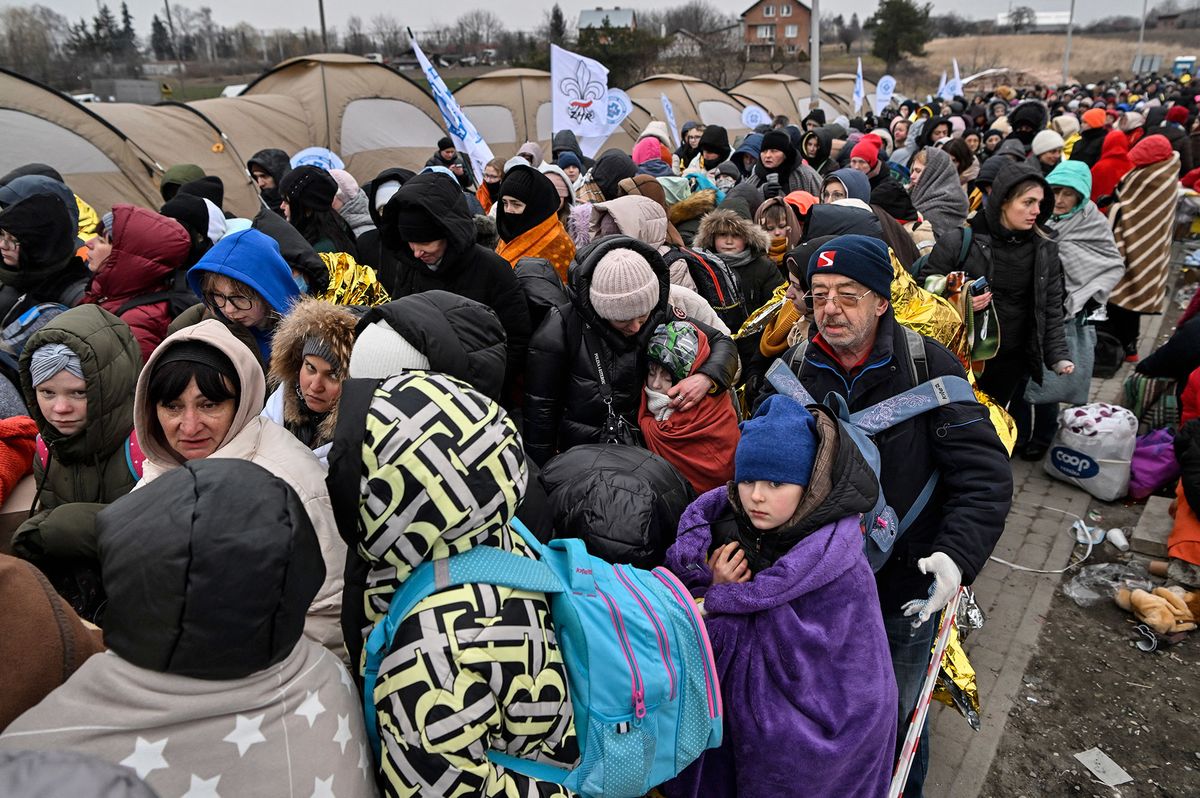 As of today, over 2.5 million people have fled Ukraine to its neighbouring countries- Romania, Poland, Hungary, Moldova, and Slovakia. While the exact number of displaced people is hard to verify at the time, the EU believes the number of refugees could very well climb to seven million in the upcoming days.

In late February and early March, people from different parts of Ukraine finally made it to the borders. They had been travelling, sometimes walking for miles in sub-zero temperatures with very little to no food, water, and shelter as indicated by several accounts. According to initial reports, people of colour, predominantly from countries like the Middle East, India, and Africa, were being stopped at the border and accused the authorities at the Ukraine-Poland border of racism.

Many first-hand accounts emerged, for example, Claire Moore, a Black student, told Al Jazeera that she was trying to board a train in Lviv but was pushed down by a guard who repeatedly told her that this train is just for women and just looked away. This was even after Moore had pointed out that she indeed was a woman.

Another student, Rachel Onyegbule, a first-year medical student from Nigeria shared her story with CNN, of how she was left stranded 400 miles from the border, after that 10 more buses that arrived left with Ukrainians as they were “prioritized over African- men and women- at every point” and they simply told her that they would have to walk and there were no more buses. She told during the interview that her body was numb, and she hadn’t slept in four days by then.

The delegation of the EU to Kenya denied these claims, the EU said that they have given unrestricted access to those fleeing the conflict, in countries like Poland, Slovakia, Hungary and Romania. However, some people say they could enter Romania and Moldova where they received a warm welcome and “relatively smooth transit”.

On 24th February, African nations at the United Nations Security Council (UNSC) held at the HQ in New York, condemned this treatment of African citizens. Indian nationals reported incidents of violence too, including how they were being ill-treated and manhandled by the authorities at the Ukraine-Poland border. The students took it to social media and posted videos of the incidents.

The Mint spoke to some of the students who recalled incidents of discrimination and violence. A fourth-year medical student Ashmita said, “They gave preference to the Ukrainians who crossed over to the Romanian side in cars and buses. But had to get down from our bus and walk 8 km from Chernivtsi (Western Ukraine) to the check post and wait on the Ukraine- Romanian border”.

In the light of these reported incidents, the Indian Prime Minister Narendra Modi chaired a meeting with high-level officials to discuss and accelerate the ongoing evacuation efforts under “Operation Ganga”. He also sent four ministers from India to oversee and facilitate the evacuation efforts. He sent Jyotiraditya Scindia (Minister of Civil Aviation) to oversee Romania and Moldova, Kiren Rijiju (Minister of Law and Justice) to Slovakia, Hardeep Singh Puri (Minister of Petroleum and Natural Gas) to the Hungary border, and Former General VK Singh (Minister of State in the Ministry of Road Transport and Highways) headed to Poland.

These incidents led a UN expert, Tendayi Achiume, from the Human Rights Council, to release a statement that addressed the “life-threatening racist and xenophobic treatment”, that non-white individuals are facing, not only at the border but they were denied access to bomb shelters in Ukraine, transport to flee the conflict-torn zone, even stories emerging of “being denied access to consulates of their country of origin”. Even children asked to stay in sub-zero temperatures freezing with no shelters. She informed how this racial, ethnic, and national profiling is prohibited under International Law.

Ukraine’s Ministry of Foreign Affairs has denied these allegations saying in a tweet that there is no discrimination on our borders, “based on race, skin color or nationality, including when it comes to the crossing of the state border by foreign citizens. The first come first served approach applies to all nationalities”. However, these incidents have not existed in isolation. Several people from various non-white countries and nationalities have accused the border authorities of this discrimination and ill-treatment with some of their stories covered by journalists and reporters on the ground.

Why are some welcomed, and others shunned?

The five neighbouring countries have been nothing but supportive, with Poland alone taking in over a million refugees from Ukraine. The conditions for getting the refugee status requires one to be a “Ukrainian citizen or people legally living in Ukraine, as such as foreign students”. The European Union has given Ukrainian refugees the right to live and work for up to three years, this is, in addition, to access to healthcare, education, and housing for up to one year without any lengthy procedures to worry about.

Most countries in Europe have welcomed Ukrainian refugees with open arms, into their borders and their homes. However, experts have noted that the discrimination is not only racial but there are two other factors- cultural and political. The former is due to the long historic ties between Ukraine and Poland, while the latter is due to “terrorism fears over the last two decades as they have shaped the reception of migrants from countries perceived as security threats.”

These sentiments and distinctions were made clear, in a statement made by the Bulgarian President Rumen Radev, "These people are Europeans" further adding, "these people are intelligent, they are educated people...This is not the refugee wave we have been used to, people we were not sure about their identity, people with unclear pasts, who could have been even terrorists..."

A Syrian journalist Okba Mohammad responded to the statement calling it a mix of “racism and Islamophobia.” Mohammad fled his hometown of Daraa in 2018 and is currently living in Spain with other Syrian refugees. He recalled his journey and similarities between two situations, taking “shelter underground to protect himself from Russian bombs”, struggling on an overcrowded bus to get to the border, and separated from his family at the border. He added, “A refugee is a refugee, whether European, African or Asian.”

In 2015 and 2016, over a million refugees crossed the border from Syria and Iraq to Europe seeking asylum. They were met with resistance, with Poland posting riot police in addition to the border guards to stop asylum seekers from entering the country. This led thousands to be stranded between Belarus and Poland. One after the other, countries pushed back and refused to accept refugees and toughened security measures at the borders.

In fact, until last year the EU states had taken in 1 million Syrian refugees, out of which Germany took most of them. Even in back in 2015-16, Germany took over 1 million migrants and urged the other EU states to accept some. Even today, Germany’s Interior Minister Faeser announced that the country would be accepting refugees fleeing from Ukraine regardless of their nationality.

Countries like Poland, Hungary, Slovakia and the Czech Republic were “most resistant” to allow Syrian refugees and have done a complete 180-degree reversal on their policies regarding people from Ukraine. Several policy experts were themselves struck by this contrast agreeing that their race and religion did play a role in this decision-making. To this day, countries in the Mediterranean and EU states have been heavily criticized for funding Libya for helping asylum seekers “return them to abusive — and often deadly — detention centres.”

While the efforts and hospitality shown by these countries for the Ukrainian refugees are lauded, it is hard to ignore the stark difference in treatment and it has compelled many to review how we look at asylum seekers. The people fleeing war have lost everything, their homes, livelihoods, and even people they held dear.

After facing that kind of trauma, what these countries have done for Ukrainian refugees is praiseworthy. But this compassion was missing when millions of people from the Middle East or North Africa were seeking asylum, who had lost everything too, and were fleeing war. The existence of such narratives in the mainstream media reflected these views of how for years the term refugee has been synonymized with a non-white person from a third world nation.

This is one of the prominent aspects of systemic racism- people deliberately or not- viewing these issues based on someone’s identity as opposed to seeing it as a humanitarian one. Ukraine is not a part of the EU or NATO, yet western countries have imposed sanctions on Russia and welcomed Ukrainian refugees with open arms, without any obligation to do so. The refugee crisis out of Ukraine is unprecedented, and it has forced many to rethink their views on the subject, which hopefully translates into reform and does not become another moment forgotten when next time we are faced with a similar crisis.

Uncovering Racism in the time of Crisis (Part 1): Media Reportage