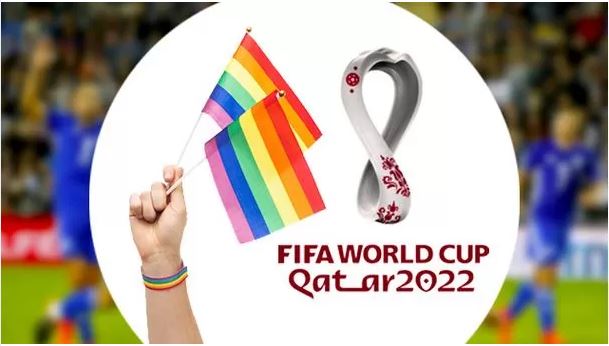 Earlier this week, the Fédération Internationale de Football Association (FIFA) released a statement celebrating the beginning of Pride Month. Accompanied by an image of staff holding the pride flag outside FIFA’s headquarters in Zurich, the statement said, “June is a celebration for the LGBTQIA+ community, as well as an opportunity to peacefully protest and raise political awareness of current issues”. In the tweet from the official FIFA Twitter account announcing the statement (where their profile picture has been changed to include rainbow branding of their logo, as per all their social media platforms), they claimed that they were “working to ensure the FIFA World Cup Qatar 2022, will be a celebration of unity and diversity”.

However, this reference to the World Cup, due to begin in November, caused controversy online due to FIFA’s questionable choices towards the LGBTQ+ community. FIFA chose the peninsular Arab country of Qatar to host the World Cup 2022, a country where male homosexuality is illegal. In Qatar, male homosexuality carries a punishment of up to three years in prison and a fine, with the possibility of the death penalty for gay Muslim men under sharia law. The Qatari government does not recognize same-sex marriage or civil partnerships regardless of gender, nor does it allow people in Qatar to campaign for LGBTQ+ rights.

Australian footballer, Josh Cavello, has already expressed his concern about playing in Qatar due to this violation of human rights. As the only current openly gay footballer in men’s top-flight football, he told The Guardian’s Today In Focus podcast that playing for Australia in the World Cup is “something that I'm very scared (of) and wouldn't really want to go to Qatar for that."

He added: "One of the greatest achievements as a professional footballer is to play for your country and to know that [the World Cup] is in a country that doesn't support gay people and puts us at risk of our own life, that does scare me. This made him “reevaluate”: “is my life more important than doing something really good in my career?" In response, Nasser Al Khater, head of the tournament's organising committee, replied that Cavallo would be "welcome here in the state of Qatar".

Nasser Al Khater has now given multiple press conferences to assure international media and fans that Qatar will be welcoming to fans regardless of their sexuality but all recent actions by Qatari officials involved in the organising have indicated otherwise. In April of this year, a senior security official for the Qatari government told the Associated Press that flags could be confiscated from people to allegedly protect them from being attacked by anti-LGBT spectators.

Last month, investigative journalists discovered that some hotels on FIFA's official list of recommended accommodations for the World Cup were outright refusing to provide rooms for same-sex couples. Other hotels on the list indicated they would accept bookings for same-sex couples, so long as they hid their relationship in public.

During a press conference in Germany on May 20, the Emir of Qatar, Sheikh Tamim bin Hamad Al Thani, stated that the LGBT visitors would be welcomed to the 2022 World Cup but, "we expect and we want people to respect our culture".

One might wonder why FIFA has been so adamant to press ahead with hosting their biggest tournament in a country that claims discrimination on the basis of sexuality is simply part of their culture. As part of the massive 2015 FIFA corruption scandal, the United States Justice Department concluded last year that FIFA officials were bribed by Qatar to award the country the 2022 World Cup (and by Russia for the 2018 World Cup). The report explicitly revealed details about money paid to five members of FIFA’s top board ahead of the 2010 vote to choose Russia and Qatar as hosts. Qatar defeated the US in a runoff by a group of voters that had already been stacked against them as two members had been secretly filmed agreeing to sell their votes to Qatar.

Former UEFA president Michel Platini was arrested by French police in 2019 in relation to the awarding of the 2022 World Cup to Qatar. His arrest was the first substantial public move in an investigation opened in 2017 by France's Parquet National Financier, which is responsible for law enforcement against serious financial crime. Despite all of this, FIFA still did not change its decision to give the World Cup to Qatar.

It would seem that FIFA considers money gained from Qatar through bribery more important than equality for all human beings. Their claims to make the World Cup this year a “celebration of unity and diversity” has been heavily criticised by LGBTq+ charities and journalists. British journalist Piers Morgan tweeted FIFA to say, “You’ve given the World Cup to a country where it’s illegal to be gay, and Muslims can be executed for it. If you really gave a stuff about Pride Month, or gay rights, you wouldn’t have done that”.