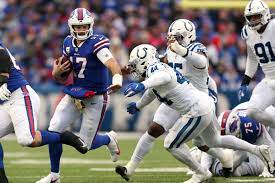 Following the 2021-2022 NFL season, many changes were made in many teams throughout the league. From trades to drafts, the off-season changes made the upcoming season much more exciting. Due to my excitement, I picked the winner of every single game next season and predicted the playoffs as well. After a long time of choosing the winner of almost 300 games, I finally have my predictions for the 2023 NFL playoffs.

Starting in the AFC, I believe the seventh seed will end up being the Las Vegas Raiders at 10-7, just like last year. With the addition of the best wide receiver in the league, Davante Adams, quarterback Derek Carr is going to have a field day. I believe Adams will continue to be one of the most sure-handed, dominant receivers in the league. Tight end, Darren Waller is also going to have a great year.

With the Raiders grabbing the lowest seed in the AFC at 10-7, another team I predict to go 10-7 will narrowly miss the playoffs for the second year in a row. That team is the Miami Dolphins. With the signing of Tyreek Hill, the third-best receiver in the league, over the off-season to accompany speedster receiver Jaylen Waddle, the Dolphin's offense becomes the fastest in the league. The problem is I don’t think quarterback Tua Tagovailoa will be able to keep up. Tua is over-hated and has a lot of talent, but his arm lacks accuracy and strength. Despite having an explosive offense and a solid defense, the Dolphins fall early in the season yet another year.

The sixth seed in the AFC will fall to the Baltimore Ravens at 11-6. With quarterback Lamar Jackson and running back JK Dobbins returning, the Ravens will have one of the best run games in the league next year. Their main issue is their best receiver Hollywood Brown traded being this off-season. With no big-name talents for Jackson to throw to, the Ravens might deal with some dry spells throughout the regular season. Nonetheless, they end up as the 6th seed after a losing tough division title fight with their rivals, Cincinnati Bengals.

I believe the AFC’s fifth seed will be the Kansas City Chiefs. The Chiefs are an interesting team because they lost quite a bit of talent last season, like Tyreek Hill and safety Tyrann Mathieu.  However, how can one doubt Patrick Mahomes and Andy Reid? I think Mahomes and Reid will carry the Chiefs this season and place them in a comfortable position at 11-6 with the 5th seed.

With the addition of quarterback Matt Ryan this off-season, the Indianapolis Colts will win the AFC South with a 10-7 record and get the 4th seed. It will be a struggle between the Colts and Titans for the AFC South. Despite Titan running back Derek Henry expected to return swinging, Matt Ryan is an upgrade at the quarterback position for the Colts, so I’m taking the Colts to win the division.

The third seed in the AFC will be the Cincinnati Bengals, ending with 12-5. I don’t think quarterback Joe Burrow and receiver Jamar Chase will skip a beat from last year, and the chemistry between the youngsters in the team will only improve. Also, can we get a round of applause for the general managers finally getting Burrow a solid offensive line?

The second seed in the AFC will belong to the Buffalo Bills at 13-4. I think Josh Allen is already a top 3 quarterback, but this year he will solidify himself as one of the best talents we’ve ever seen. With Allen dominating the league and potentially winning MVP, the Bills will stroll through the regular season and end as the second-best team in the AFC.

Ending off the AFC, I believe the first seed will go to the Los Angeles Chargers at 14-3. Not only has the Chargers’ defense improved drastically with the signing of Khalil Mack and J.C. Jackson, but I think this is the year where quarterback Justin Herbert clicks as a leader. His raw talent will become more controlled, and the Chargers will become the most domiant team in the NFL, earning that first-round bye in the playoffs.

Despite the Los Angeles Rams winning the super bowl last year, I think the NFC is the weaker conference of the two. However, I believe it is the more competitive conference, with less of a gap between the best and worst teams. This fact makes the football conference rather interesting indeed.

I predict the team to take the seventh seed will be the Philadelphia Eagles with 10-7. Quarterback Jalen Hurts is to take a big step forward in his career this season and make his way into talks of being a top 10 quarterback.

The sixth seed in the NFC will be the Aaron Rodgers-led Green Bay Packers with a record of 10-7. I think the Packers will take a step backward this season with the loss of Davante Adams. However, they still have the second-best quarterback in the league and one of the best running back duos in Aaron Jones and AJ Dillon. Along with their great offensive line, they will still manage to get ten wins and grab the sixth seed.

The fifth seed will end up in the hands of the 49ers at 11-6. Their quarterback situation is rough, as Jimmy Garoppolo and Trey Lance fight for the first-string. I believe in the first few weeks that Jimmy G. will take the reins, but later on, they’ll give Trey Lance a shot and won’t look back.

I believe the fourth seed will go to the Tampa Bay Buccaneers with a record of 11-5-1. If it’s one thing I’ve learned in my 15 years of watching the NFL, it’s don’t bet against Tom Brady. Gronk is gone, but I don’t think that’ll stop Brady from winning the AFC South and making receivers Mike Evans and Chris Godwin look like top-five caliber.

The third seed will go to the Los Angeles Rams at 12-5. I believe their offense will recede in explosiveness a bit, but Matt Stafford and Cooper Cupp will ball out nonetheless. I also still believe the Rams’ defense is the best in the league. A comfortable third seed for the LA Rams.

The second seed will go to the Minnesota Vikings, who will take a massive step forward this season at 13-4. This is the year where things will click for the Vikings, as they’re under new management and the players seem to be more excited to play. Justin Jefferson is the second-best receiver in the league, and Dalvin Cook is a top-five running back. I think they’ll both make a case for Offensive Player of the Year. While I don’t fully trust Kirk Cousins to make the big play, he’s a good system quarterback who can win many games with proper guidance.

Finally, the first seed in the NFC will belong to the Dallas Cowboys at 13-4. No, I’m not a Dallas fan. I know this isn’t the popular pick, but something tells me the Cowboys will shine in the regular season. I think Ceedee Lamb has the talent to be one of the best receivers in the league while running back Tony Pollard will have a breakthrough year. Don’t worry, though, Cowboys haters, the season doesn’t end as well as it starts. Now, we’ll discuss the playoff games.

In the first round in the AFC, the 5th seeded Chiefs will beat the 4th seeded Colts. As much as I love Matty Ice of the Colts, I seriously doubt Patrick Mahomes will lose in the first round of the playoffs. The three-seeded Bengals will defeat the sixth-seeded Ravens in a fantastic game, one I believe will be Game of the Year. Lastly, the second-seeded Bills will beat the seventh-seeded Raiders. Derek Carr is a quarterback who deserves to see a Super Bowl, but in a conference like the AFC, I don’t think it will happen.

In the second round of the playoffs in the AFC, the Bengals take on the Bills. While most people will pick the Bills to win this game, I’m leaning towards the Bengals. Their weapons will offensively overwhelm Josh Allen, and he’ll have to wait another year for that Superbowl. The first-seeded Chargers will beat the Chiefs, and the Chief's “dynasty” will officially end. That means it’s the Chargers and the Bengals in the AFC Championship!

In the NFC, I’m taking the Minnesota Vikings to defeat the Los Angeles Rams in a game that will make Vikings fans unbearable, but you guys deserve it. To end off the second round of the playoffs, the Bucs will defeat the first-seeded Cowboys, and Cowboys fans’ tears will yet again be seen from all over the world. At least they had a great regular season!

Four teams are now left. In the AFC championship, I believe the Bengals will defeat the Chargers and make the Superbowl for the second time in a row. While I think Justin Herbert is the more athletic and perhaps even more talented quarterback, Joe Burrow has the mentality of an absolute and utter winner. Now he’s even more mature than last year and protected by a good offensive line, so I think they win the AFC again.

In the NFC championship, the Tampa Bay Buccaneers will defeat the Minnesota Vikings as Brady will reach his second Superbowl with the Bucs. Minnesota’s strong system for Cousins will only got them so far, but Justin Jefferson will have only made his case for not only Offensive Player of the Year but MVP as well. Thus, a successful season for the Vikings nonetheless.

Finally, here we are. Superbowl 57: Bengals vs. Buccaneers. Burrow vs. Brady. I believe Burrow will defy the odds and make the last game of Tom Brady’s career a loss in the Superbowl. With the Bengal’s weapons and unmatched team chemistry, I think they finally win their first Superbowl in team history and make the city of Cincinnati proud. This season will be defined by the young talents fully taking the torch from the older legends. The new era of the NFL is here, and it will be signified through Joe Burrow defeating Tom Brady in the Superbowl.

1 month, 1 week ago by JDPowell

As a Bengals fan: inject this directly into my veins please.