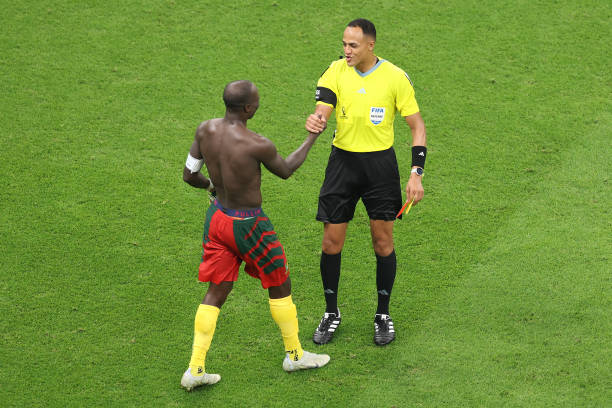 After every World Cup competition, a series of official awards are given out by FIFA; Golden Ball, for the best player; Golden Boot, for the top goal scorer; Golden Glove, for the best goalkeeper; the list goes on. These awards are boring! They only look at the best few players from the top few teams and players from the same dominating nations win them regularly. The World Cup is about far more than just the best of the best, it’s also about the stories, moments, fans, villains, heroes, and far more. In this list of unofficial awards given out by myself, across a series of articles, I look to celebrate all of those who aren’t included in the official awards and capture some of that magic that makes the World Cup such a spectacle.

There have been some brilliant, crazy, and downright bizarre occurrences at this world cup. This award will go to an individual who completely subverted our expectations, and displayed some rarely witnessed moments.

Arguably the best players from their respective nations: Cristiano Ronaldo and Andre Onana were both dropped, with the latter sent home entirely after a reported bust-up with manager Rigobert Song. Ronaldo had to watch on from the bench as his replacement Goncalo Ramos scored a hattrick, which sent Portugal to the quarter-finals. Both Ronaldo and Onana showed an astonishing lack of professionalism for players of their stature.

England captain Harry Kane built up a reputation for himself as one of the most reliable players from the penalty spot, it came as a great surprise to see him send his second spot kick of the game into orbit, especially after dispatching his first so skilfully.

Cornelius and Ui-jo were competing for the worst miss of the tournament; the usually predatory strikers somehow missed golden chances in drab 0-0 draws.

Koopmeiners fooled everyone with a brilliant move; he passed a close-range free kick into the giant center forward Wout Weghorst lurking in the wall, who turned and finished late on to send the quarter-final to extra time. Sadly, this wasn’t enough for the Netherlands; they lost on penalties to the eventual champions.

After losing their opening game 7-0, there wasn’t much hope for Costa Rica in their next match against Japan. The Japanese had just secured a historic victory over Germany; they looked to finish off Costa Rica to send themselves into the Knockout stages. Keyser Fuller threw a spanner in the Japanese works; the wingback looped a shot over Gonda to score the only goal of the game with Costa Rica’s only shot on target in 2 games!

Tunisian defensive midfielder Laidouni whipped up the Tunisian masses with a brilliant display of passion. He made a crunching tackle against Denmark, then proceeded to celebrate in front of his nation’s fans, beating his chest and shouting. Loudoun perfectly encapsulated what playing for your country in a world cup is all about- just what we love to see.

I can best describe the winner of the craziest moment award to have channeled his inner ‘Jekyll and Hyde’. Brazil was already through to the next stage of the tournament before their game against Cameroon; the ‘Indomitable Lions’ needed a victory against the record champions, and the other game in the group to end favorably to make the round of 16. A pinpoint cross from the right was met by Vincent Aboubakar’s head in the 92nd minute to put his country 1-0 up. The Cameroonian captain was the hero. Aboubakar, caught in the frenzy of celebrating his special goal, seemed to forget that he was already booked when taking his shirt off to celebrate. Referee Ismail Elfath had no choice but to show the Cameroonian striker a red card; Aboubakar accepted his fate and smiled with Elfath as they shared a handshake before receiving his marching orders. A truly bizarre moment from a nation that thoroughly entertained across 3 group-stage matches.