The ITER Project and ‘the way to new energy’ 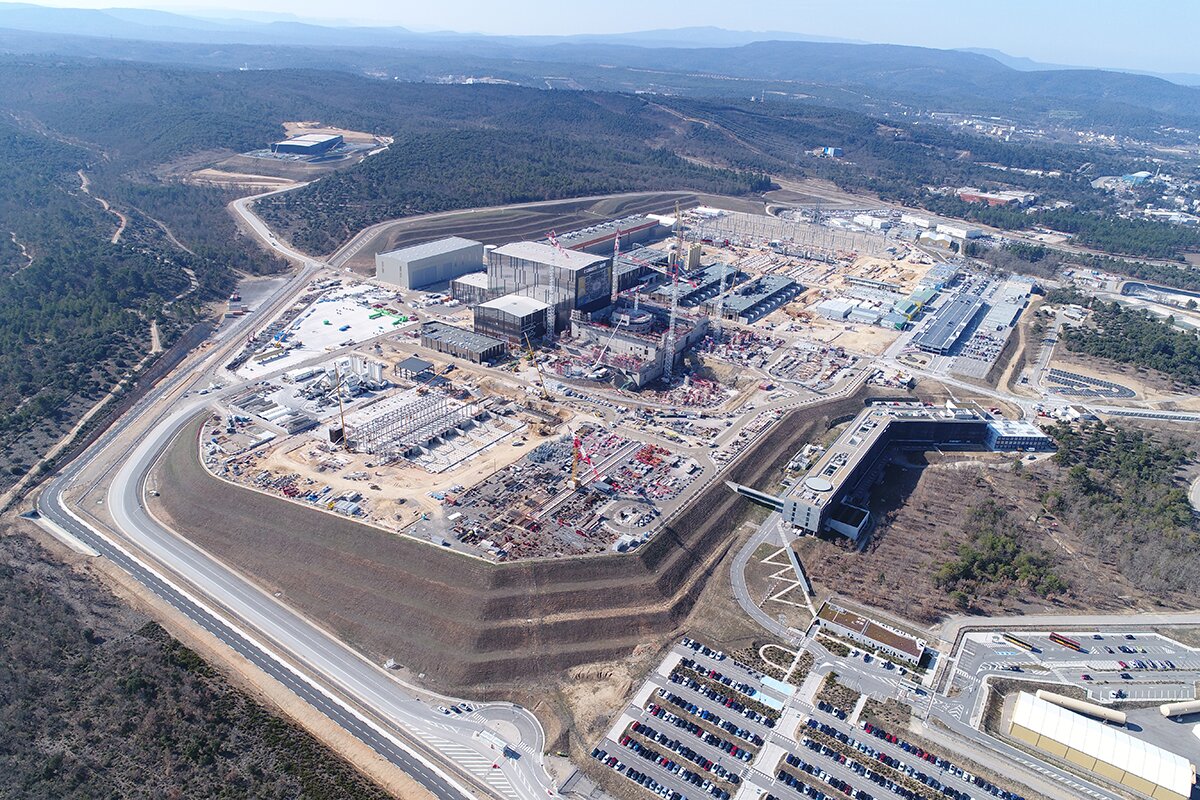 A view from the centre of the tokamak complex at the ITER site (2018)/ ITER Organization/ FLICKR flickr.com/photos/oakridgelab/41809720041/

The world is now at a critical point: it is crucially important that greenhouse gas emissions are reduced, and alternative, reliable, energy sources are found and utilised. The ITER project, initially known as the International Thermonuclear Experimental Reactor may be, if successful, the answer to these problems. ITER (meaning ‘the way’ or ‘the path’ in Latin) is a collaboration project of 35 nations to build a magnetic fusion device designed to ‘prove the feasibility of fusion as a large scale and carbon-free source of energy based on the same principle that powers our Sun and stars’. It is in the process of being built, since 2010, in southern France near Aix-en-Provence. Its project members (who run and fund the project) include China, the EU, India, Japan, Korea, Russia and the United States, as well as cooperation with other countries including Australia, Thailand and the United Kingdom.

How does it work?

The process uses nuclear fusion, the same method by which the Sun produces light and heat, with the long-term goal of generating electricity. Hydrogen nuclei collide and fuse into heavier helium atoms and release huge amounts of energy. At the Sun’s core, where temperatures reach 15,000,000°C, the hydrogen atoms are constantly moving, and collide at very high speeds. When they do this, the natural electrostatic repulsion that exists between the positive charges of their nuclei is overcome and the atoms fuse, creating helium and one neutron. In the 20th century, the most efficient reaction (the highest energy gain at the lowest temperature) was identified, between hydrogen isotopes deuterium and tritium (DT).

Certain conditions are required for the reaction to occur, and these conditions must be created and maintained at ITER. These include the necessary 15,000,000°C temperature like in the Sun, sufficient plasma particle density (to increase the likelihood of collisions) and sufficient confinement time (to hold the plasma, which expands, within a defined volume). This plasma is referred to as the fourth state of matter when electrons separate from the nuclei at extreme temperatures. The Tokamak device, currently under construction at ITER, provides the necessary conditions to confine and control the plasma using powerful magnetic fields.

The Tokamak (derived from the Russian acronym meaning ‘toroidal chamber with magnetic coils’) is a doughnut-shaped vacuum chamber, designed to harness fusion energy. It was first developed by Soviet researchers in the late 1960s. Kinetic energy from the reaction is absorbed as heat through the vessel walls. Cooling water circulating under pressure then gets heated to produce steam which turns turbines and alternators to produce electricity. This process is incredibly efficient: the daily consumption of a 1GW coal-fired reactor requires 10,000 tons of coal, whereas the daily consumption of a fusion reactor of the same size requires just 750 grams of DT, approximately the size and weight of a pineapple. ITER’s 23,000-tonne machine will be housed in the seven-storey Tokamak Complex. When completed, it will be the world’s largest: twice the size of the current largest and ten times the plasma chamber volume. All the project’s participants are involved in the procurement of the machine’s components and plant systems. For example, China is in charge of the correction coils, India the cryostat and South Korea the thermal shield.

Timeline of the project

Nuclear fusion is a lot better for the environment than other forms of generating electricity. For example, ITER states that the amount of radioactive waste is 100 times less than a fission reactor and should produce no high-activity, long-lived radioactive waste. The activation of components in a fusion reactor is low enough for the materials to be recycled or reused within 100 years. Additionally, fusion has very little in common with nuclear weapons technology and does not produce any materials which could be exploited for weapon construction. It does not employ fissile materials such as uranium and plutonium. There is also no risk of a nuclear accident, as was the case in Fukushima (Japan) in 2011. If any disturbance occurs, the plasma cools within seconds and the reaction stops. There is no risk of a chain reaction. In 2012, when the ITER Organization obtained licensing as a nuclear operator in France, the ITER fusion device became the first in the world to successfully examine its safety case.

Fusion fuels are widely accessible and nearly unlimited. Deuterium can be distilled from water (freshwater or seawater), while tritium will be produced during the fusion reaction as fusion neutrons interact with lithium. Lithium reserves will be able to fulfil the needs of fusion devices for millions of years as it can be found both on land and underwater.

Nuclear fusion also produces virtually no pollution. It does not emit carbon dioxide, sulphur dioxide or other greenhouse gases into the atmosphere. It produces helium, which is a non-toxic, inert (very unreactive) gas.

The ITER project has been criticised for its possible environmental impacts, as well as its cost. On the announcement of the French site in 2005, French Green party politician Noël Mamère was among several European environmentalists who expressed opposition. He argued: ‘This is not good news for the fight against the greenhouse effect because we're going to put ten billion euros towards a project that has a term of 30–50 years when we're not even sure it will be effective’. Environmentalists are suggesting that despite being a more environmentally sound energy source than nuclear fission, fusion fuel is neither clean nor safe. ITER claimed, however, that if successful, nuclear fusion will result in a cost-effective, potentially inexhaustible supply that will eventually replace oil and gas altogether. Also in 2005, Greenpeace International issued a press statement criticising government funding of ITER, believing the money should have been spent on renewable and existing energy sources instead. Rebecca Harms, Green/EFA member of the European Parliament's Committee on Industry, Research and Energy, said: ‘In the next 50 years, nuclear fusion will neither tackle climate change nor guarantee the security of our energy supply’. However, supporters of ITER asserted that other potential replacements for fossil fuels have environmental issues of their own - wind, solar and hydroelectric power all have very low surface power density (amount of power per unit volume) compared to ITER's successor DEMO which, at 2,000 MW, would have an energy density that exceeds even large fission power stations.

ITER’s initial budget was around €5-6 billion, but the total price of construction and operations is projected to be closer to €18-22 billion. In May 2016 the ITER chief Bernard Bigot (former head of French nuclear state agency CEA) told a French newspaper ITER would be delayed by more than a decade and incur another €4 billion of cost overruns, with the first test of its heated plasma being not before 2025 as opposed to 2020. In 2018, the US Department of Energy nearly tripled its cost estimate covering construction alone, to $65 billion. The annual operating costs once experimental operations begin in 2025 were not included. However, ITER HQ pushed back and reaffirmed their figure of $22 billion. Many argue that this is a huge amount of money to be spending on an experiment, over a very long period, that may not even be successful. It has previously been nicknamed ‘the world’s most expensive scientific gamble’ by the BBC. Nevertheless, between 2008 and 2017, the project generated 34,000 job-years in the EU economy alone. It is estimated that from 2018 to 2030, it will generate a further 74,000 job-years and €15.9 billion in gross value. It is an incredibly multi-cultural working environment, with 29 different nationalities and over 40 languages represented among staff. French language classes are offered as part of the services for staff families and international schooling for their children.

To close, while it may be frustrating that so much is being spent on a potentially futile megaproject, ITER could be the solution to the greenhouse gas crisis and set us on the path to a new energy source. According to their website, the experimental campaign ‘is crucial to advancing fusion science and preparing the way for the fusion power plants of tomorrow’. Parallel to ITER, there are significant private investments in similar projects elsewhere in the world, indicating that this could also be financially viable. But this is not a quick fix for the world’s energy problems – the careful research, planning and construction currently underway are essential to gain the best possible outcome. This project, albeit a very expensive one at a time of economic crisis, is crucial for the whole world, and the future of climate change.