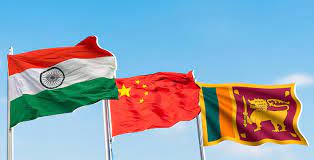 The docking of a Chinese military vessel in Sri Lanka has started a verbal war between New Delhi and Beijing. A day after the Chinese Ambassador alleged thorough interference into Sri Lanka’s sovereignty referencing India and invoked, in his words, the history of aggression shown by “the northern neighbour”.

New Delhi hit back on Saturday, saying that the Chinese envoy’s violation of basic diplomatic etiquette may be a personal trait or reflective of a larger national attitude and its view of Sri Lanka’s “northern neighbour" is likely coloured by how his own country behaves. This strongly worded statement by India was a response to an article by Qi Zhenhong, China’s envoy in Colombo.

The article, published on the Chinese embassy’s website and local news website "Sri Lanka Guardian", was a titled: “From One-China Principle to ‘Yuan Wang 5’: Let’s Join Hands and Resolutely Safeguard Our Sovereignty, Independence and Territorial Integrity.”

In the piece, envoy Qi wrote: “Looking back at the great history of the island, Sri Lanka overcame aggression from its northern neighbour 17 times, colonisation by the West for 450 years, and an anti-terrorism war for nearly 3 decades…is now still standing in the world bravely and proudly. Any infringement on the national sovereignty, independence, and territorial integrity of Sri Lanka shall not be tolerated.”

He went on to link this to the military vessel: “Approving a foreign vessel’s port call at Hambantota is a decision made by the Sri Lankan government completely within its sovereignty. External obstruction based on so-called ‘security concerns’ but without any evidence from certain forces is a thorough interference into Sri Lanka’s sovereignty and independence" he said.

He stated that: "Fortunately, with China and Sri Lanka’s joint efforts, the incident was resolved, which not only safeguarded Sri Lanka’s sovereignty and independence but also defended international fairness and justice once again,” the Chinese envoy said.

The exchange happened after Sri Lanka’s contrary decision to allow Yuan Wang 5, the Chinese military research and survey vessel, to dock at its Hambantota port from August 16 to 22, despite India showing concerns over the move. Earlier, the vessel was expected to dock from August 11 to 17, and was deferred due to protests by India. Sri Lanka said that its decision to allow the ship featured in the interests of all parties concerned.

Seeking to draw a parallel between Sri Lanka and China in the wake of US House Speaker Nancy Pelosi’s visit to Taiwan, the envoy wrote that: “Just like Sri Lanka, China suffered a hundred years of humiliation. Because of a similar dark experience, China has always been supporting Sri Lanka. In contrast, some neighbouring countries always make various groundless excuses to bully Sri Lanka and trample on its  sovereignty and independence repeatedly.”

On Saturday night, over a day after the article, the Indian High Commission in Colombo hit back saying: “We have noted the remarks of the Chinese Ambassador. His violation of basic diplomatic etiquette may be a personal trait or reflecting a larger national attitude. His view of Sri Lanka’s northern neighbour may be coloured by how his own country behaves. India, we assure him, is very different,” the Indian High Commission in Sri Lanka said.

“His imputing a geopolitical context to the visit of a purported scientific research vessel is a giveaway. Opaqueness and debt driven agendas are now a major challenge, especially for smaller nations. Recent developments are a caution. Sri Lanka needs support, not unwanted pressure or unnecessary controversies to serve another country’s agenda,” the Indian High Commission said.

New Delhi was concerned about the possibility of the ship’s tracking systems attempting to survey Indian installations. Before Sri Lanka’s decision, India had rejected China’s “insinuations” that New Delhi pressured Colombo against the planned visit by the Chinese vessel but asserted that it will only take decisions based on security concerns.