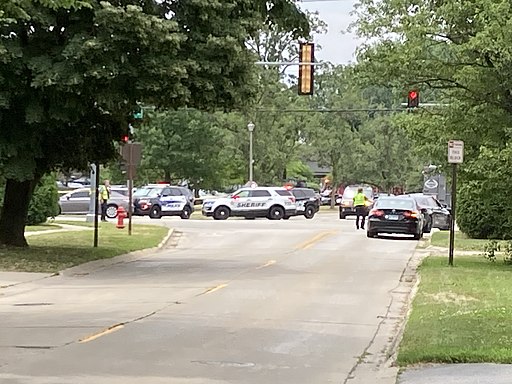 At least five people were killed and 16 people were injured in a shooting at the Fourth of July parade in Highland Park, a suburb city outside of Chicago, Illinois.

The law enforcement officials confirmed on Monday that there is “an active shooter incident,” reported NBC News.

"Law enforcement agencies are searching for the suspect; evidence of a firearm has been recovered," the city said according to NBC News. "Numerous law enforcement officers are responding and have secured a perimeter around downtown Highland Park. 16 people have been transferred to the hospital; 5 individuals are confirmed deceased."

The parade was stopped about 10 minutes after it started as several shots were fired, ABC 7 reported. The gunshots hit an unknown number of people at the parade.

Ariel Rotbol, who was walking in the parade, described the shooting as a “war scene.”

“People just in hysteria. We saw the helicopter, the cars, Homeland Security coming in,” she said to ABC 7. “In Highland Park, we have not experienced this yet and I don't think anybody obviously thought this is what was going to happen today and it is just hard to fathom."

Several witnesses, including Miles Zaremski, said to Chicago Sun-Times that they heard multiple shots fired at the parade.

“I heard 20 to 25 shots, which were in rapid succession. So it couldn’t have been just a handgun or a shotgun,” Zaremski, a Highland Park resident, said to the Chicago Sun-Times.

State Senator Julie Morrison also heard gunshots as she was a block away from the shooting, ABC 7 reports.

"We heard gunshots that I kind of thought it was fireworks, then all of a sudden this wave of people starts running back towards us screaming, crying, hysterical, carrying their kids," Morrison said to ABC 7.

Illinois State Police also assisted the Highland Park Police Department in the shooting occurrence, they said in a statement.

The Highland Park Mayor Nancy Rotering said that downtown areas should be avoided as police respond, according to Fox News.

Many, including Eric Trotter, said they are astounded that a shooting has occurred.

“I felt shocked,” Trotter said to Chicago Sun-Times. “How could this happen in a peaceful community like Highland Park.”

“This doesn’t happen here,” Alexander Sandoval, who had come to the parade with his family, said to Chicago Sun-Times. “It shouldn’t happen anywhere.”

Deerfield and Evanston, nearby towns, also have canceled their Fourth of July parades in response to the Highland Park shooting.

The police have yet to reveal a description of the gunman, according to NBC News.