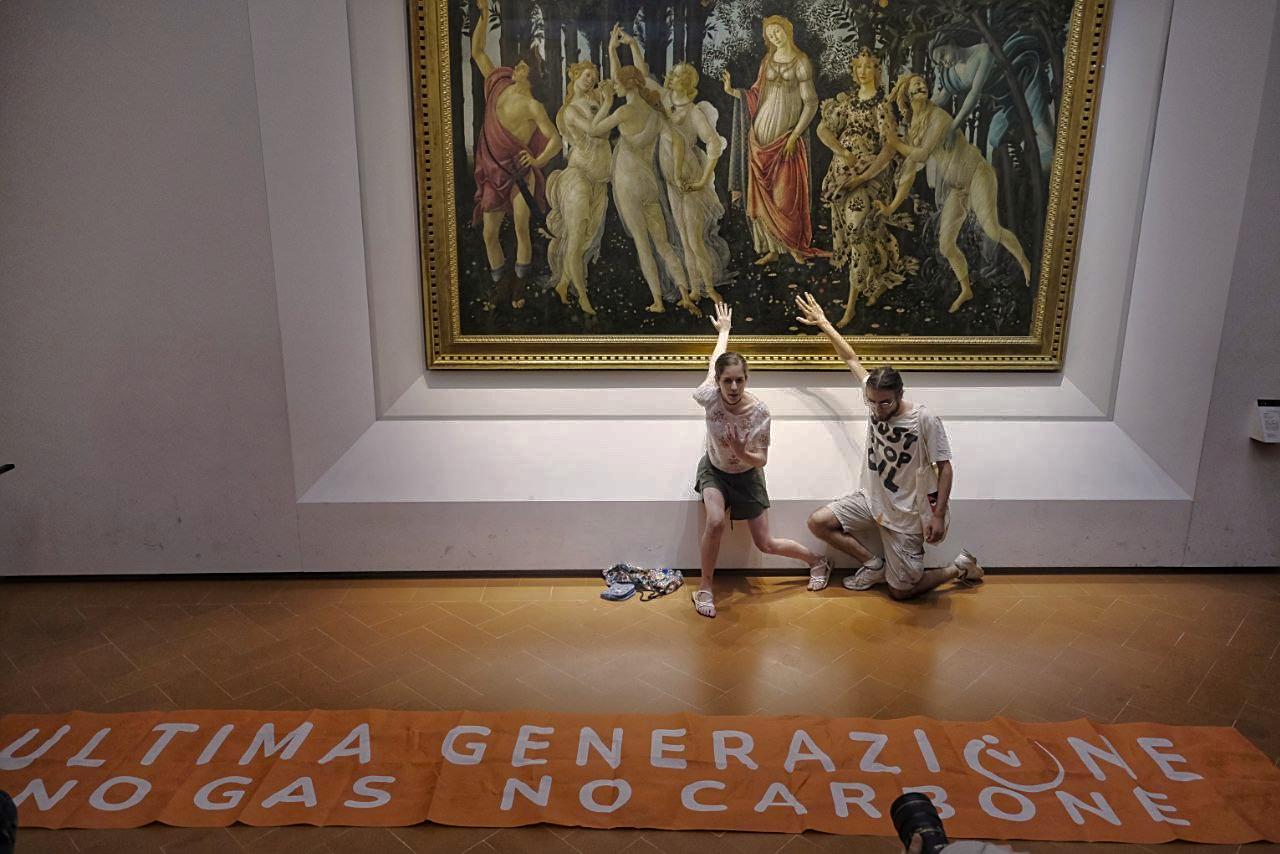 A group of activists from Ultima Generazione (Last Generation) glue themselves to the glass frame of a Botticelli painting in an art gallery in Florence for a climate protest on Friday, July 22. Influenced by the several protests that took place at the beginning of July by the organization of Just Stop Oil in the United Kingdom, environmental activists targeted the painting Primavera by Sandro Botticelli in the Uffizi Galleries in Florence.

Around 10:30 am on Friday, two protestors stuck their palms to the glass frame of the 650-year-old painting, and the other one opened up a banner that said “Ultima Generazione No Gas No Carbone (Last Generation, No Gas, No Coal).” First, they were moved away from the painting by the museum staff, and afterwards, they were taken away by the police.

According to the museum, there was no damage done to the world-famous painting. A statement from the gallery said, “If there had not been the special protections decided for the main masterpieces of the museum a few years ago by the management, today we would have had an important damage to the work, as happened recently in other museums.”

The climate activist group Ultima Generazione claims this event is the first in “a new season of actions” that will target museums for environmental protests. According to activist group’s statement on their website, they make sure they do their research not to cause any damage to the artworks. They claimed that they consulted restorers who advised them to use the proper glue for glass and frames and emphasized that it is important for them to value art and not damage it, as the governments do with the only planet we have.

Primavera, meaning Spring, painted by Botticelli at the end of the 15th century, is a Renaissance masterpiece depicting the lush growth of spring combined with figures from classical mythology. Other than the mythological figures related to spring and eternal life, there is also a very elaborate pastoral scenery. There are 500 identified plant species depicted in the painting, which contains 190 different flowers. The painting has been part of the collection of the Uffizi Gallery in Florence since 1919.

Ultima Generazione poses the question, “Is this possible to see a spring as beautiful as this today?” and calls the world to think about it when there are wildfires, food crises, and droughts all around the news nowadays. They said that they decided to use art to sound an alarm call to wake people up to the reality of the coming social and eco-climate collapse.

The activist group has been carrying out protests in Italy since December. One of their latest actions involved stopping traffic on Rome’s Grande Raccordo Anulare, a toll-free ring-shaped orbital motorway encircling Rome, during the morning rush hour on July 1st. They have demanded the Italian government close all remaining coal plants and halt all new projects for gas exploration.