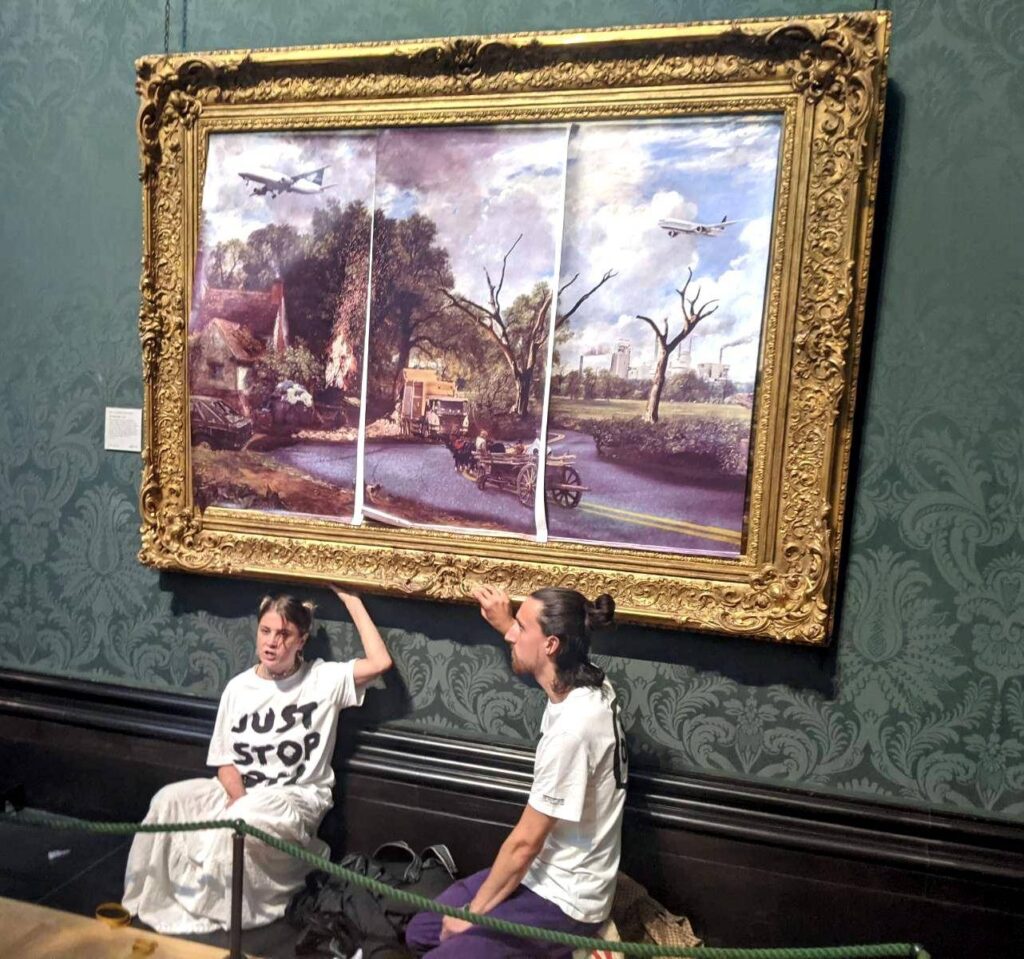 Just Stop Oil identify as a coalition of groups working together to ensure the government commits to halting fossil fuel licensing and production, in their own words. They are led by organizers from Extinction Rebellion and Insulate Britain, which came together as Just Stop Oil at the beginning of 2022. They all support a non-violent civil resistance to demand rights and justice through strikes, boycotts, mass protests, and disruption.

Some of the prominent examples of their protests include attending the British Academy Film Awards in March, where they chanted slogans and banged drums, trying to tie themselves to goalposts during Premier League matches between Everton and Newcastle, Tottenham Hotspur and West Ham, and recently glueing themselves to important artworks in art institutions.

A group of Just Stop Oil activists glued themselves to the frame of a circa 1520 copy of Leonardo da Vinci’s The Last Supper by Giampietrino at the Royal Academy in London and spray-painted “No New Oil” on the wall underneath the painting. One of them stated that no painting is worth more than their six-month-old nephew’s life, and no sculpture can feed babies starving due to extreme heat that kills the food crops.

Two activists glued themselves to the frame of the 1821 painting The Hay Wain by John Constable at the National Gallery in London, and they also covered the painting with an alternative version with airplanes, highways, factories, fire, and smoke.

Other groups of activists glued themselves to the frames of Peach Trees in Blossom by Vincent Van Gogh at the Courtauld Gallery in London, Thomson’s Aeolian Harp by Joseph Mallord William Turner at the Manchester Art Gallery in Manchester, and My Heart’s in the Highlands by Horatio McCulloch at the Kelvingrove Art Gallery and Museum in Glasgow.

Other than The Last Supper, all the artworks chosen for the protests depict scenes of nature, which aligns perfectly with their aim to inspire action against policies that contribute to climate change.

They were all calling the officials in the gallery who believe that art has the power to change the world to use that power and close down their art institutions until the government cancels all plans regarding new oil. One of the activists said that the reason for their protest is the government’s plans to license 40 new UK oil and gas projects in the coming years.