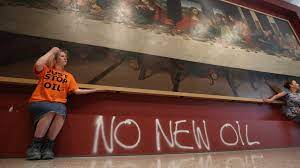 One of London's biggest art museums, The Royal Academy of Arts, hosted a gallery on July 5, 2022, with a draw that went beyond the typical works of art. At least five members of the Just Stop Oil movement adhered their hands to the frame of the painting and spray-painted "No New Oil" underneath a replica of "The Last Supper."

Between 1495 and 1497, Leonardo da Vinci completed the original masterpiece. The scenario from the Bible where Jesus eats his last meal with his Twelve Apostles and tells them that one of them would betray him is depicted in the painting. The 500-year-old replica of the picture has been credited to da Vinci disciple Giampietrino, and painter Giovanni Antonio Boltraffio may have created it, according to an NPR report.

The protest was held to urge the government of the country to promise to immediately halt all new oil and gas licenses in the United Kingdom. To put more pressure on world leaders to keep their promises, climate groups are now resorting to such overt protests in public.

Former Leeds primary school teacher Lucy Porter took part in the march. She remarked, "It would be a falsehood to argue that we still have time. We must immediately stop the production of new oil and gas, and we'll stop upsetting galleries and museums as soon as the government takes significant action. The interruption will continue until that time so that young people understand we are making every effort to help them. Nothing would make me happier than to be doing it."

It appears that the Just Stop Oil group's standard operating procedure is to spray-paint inscriptions and glues hands to notorious artworks. Activists from the group have in the past attached themselves to works of art in Glasgow, London, Manchester, the National Gallery in London, and Glasgow, all by Vincent Van Gogh. The group's fifth museum protest would be the assault on the replica of "The Last Supper." Extinction Rebellion, an activist group, promoted mass nonviolent protest as the most effective means of securing change over the previous four years, which contributed to the rise in popularity of this form of protest. Therefore, some climate activists intend to be apprehended so they can raise awareness of climate issues during their trials.

Eben Lazarus, a fellow climate activist, responded, "Art is important, [but it is] not more important than the lives of my siblings and every generation that we are committing to an unlivable future." when asked why infamous artworks are the targeted subject. Perhaps the goal of the Just Stop Oil organization is to draw attention away from historical paintings and toward pressing challenges of the present.

Unknown numbers of activists participated in the "The Last Supper" protest, but according to the Metropolitan Police, three men and two women were detained on suspicion of causing criminal damage. Regarding the painting itself, according to the National Gallery, the varnish surface had been disturbed and the frame had "suffered some damage." The painting was rehung once the damages were repaired.

The world's leaders have committed to limiting global warming to 1.5 degrees Celsius (2.7 degrees Fahrenheit) by 2100, but scientists claim that not enough is being done to avert the worst consequences of the phenomenon. Activist groups like Just Stop Oil will fervently carry on their struggle until climate change challenges are properly addressed and practical solutions are put into action.

Climate Protestors Glue Themselves To The Hay Wain