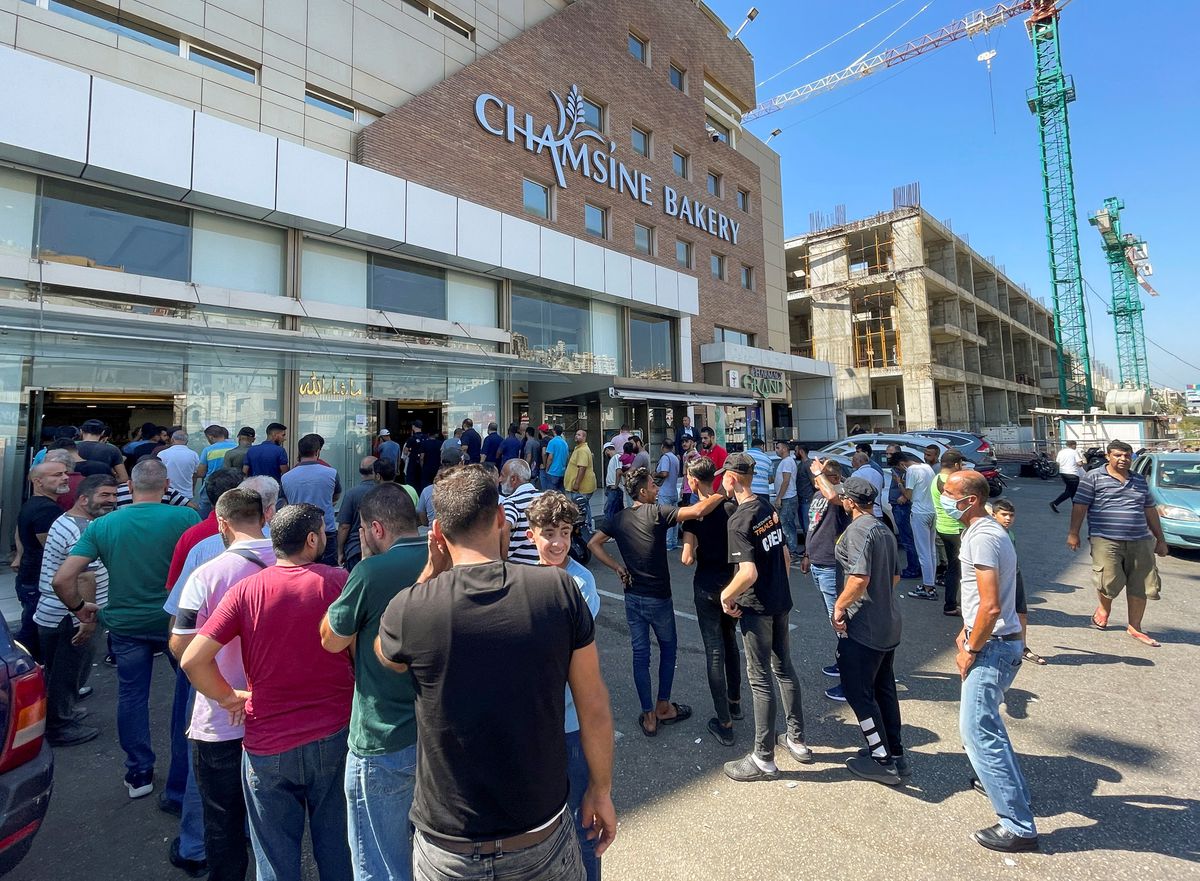 Lebanese citizens are facing a bread shortage due to a lack of wheat imports. Individuals are being forced to queue to access bread which is not only limited in stock but also high in price.

The bread crisis, which has been going on since the spring, has worsened as queues to get bread have become longer and more chaotic.

In addition to verbal fights between bakery owners and citizens, several citizens have stormed into multiple bakeries due to unexpected shortages and increased prices.

The horrifying acts have pushed bakery syndicates and bakeries to demand security protection to prevent these actions, stating that they won’t be able to continue working and producing bread in such conditions.  Also, many bakeries were forced to close their doors due to shortages in flour storage.

Racism has become a prominent factor in the bread crisis, as Lebanese politicians have been throwing the blame and accusations towards Syrian refugees.

Amin Salam, the Lebanese minister of economy, said in a press conference last month, that Syrians are buying most of the bread and not leaving any for the Lebanese citizens.  Suggesting that some Syrians are smuggling subsidised bread over to Syria to sell it in the black market for higher prices.

Cynthia Saghir, a socio-economic researcher, told The National, “It’s not like subsidized bread is being handed out free, Syrian refugees purchase bread just like anyone else in Lebanon.”

“Subsidies are not enough ― they’re supposed to complement a social protection system which is meant to be in place for the economically vulnerable. In Lebanon, subsidies and fragmented poverty-targeting programmes are used instead of developing a coherent national social protection strategy,” Saghir added.

On May 20th, the Lebanese Ministry of Industry barred bakery owners, who do not produce pita bread, from buying state-subsidized flour. This was an attempt to maintain the low price of bread and assure the subsidized flour is not used to produce other goods.

Before currency inflation, the same package of pita bread would have been sold for only 1,500 Lebanese Liras.

Russia’s invasion of Ukraine has been the main factor in  Lebanon’s wheat storage, as 80% of Lebanon’s inventory is exported from Russia and Ukraine.

The silo - which stored  70% of exported and imported goods - was destroyed in the  Beirut port explosion that occurred in 2020,  preventing storing enough amounts of wheat.

In an interview, Salam told CNBC, “We realized that there was a threat before we got to the Russia-Ukraine crisis. We knew that the country should have had another set of silos around the country to make sure if something happens, we don’t lose our reserves.”

Salam also added, “I know that the government, through the Minister of Foreign Affairs, have had several discussions about supporting Lebanon and opening up some of the shipping lines that are blocked. Since we are having a hard time receiving shipments. [Shipments] that used to take 10 days, now take three weeks.”

A $150 million loan was granted to Lebanon by the World Bank in May to help finance wheat imports. According to Salam, the loan will last between 6 and 9 months depending on the price of wheat.

Over email, the World Bank has told CNBC that, “the project will also help strengthen the governance capacity in the wheat sector and help put the agriculture and food production system on a pathway toward recovery and greater resilience.”

In a press release last month, the World Bank stated, “Lebanon is enduring a severe and prolonged economic depression.”

Since 2019, Lebanon has been suffering a tragic series of economic crises. The Lebanese currency lost approximately 80% per cent of its value and also lost buying power. This is a challenge facing Lebanese people who earn wages in the Lebanese currency.

Mona Hammoud, a teacher, says "I used to show off that my salary was two million Lebanese Liras, which was equivalent to $1300.” She continued, "today, I only make $66, which doesn't even last a week."

She also explained that the bread crisis and its increasing prices are making it impossible to survive in Lebanon.

Hammoud also said, "I applied for immigration to Canada, I don't know how long I will be waiting, but I need to leave the country as soon as possible."

Hammoud’s story reflects the desperation the food crisis has brought Lebanon's citizens. After Lebanon’s government agreed to disperse 15 million dollars back in April, in an attempt to temporarily halt the crisis, all its people can do is hope that further action is put in place.

The Beirut port silo has been Burning for two Weeks, four Towers Collapsed