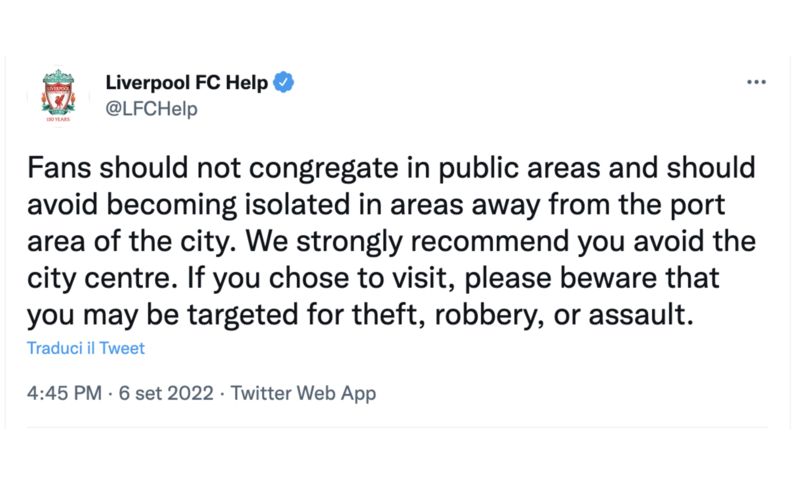 “Fans should not congregate in public areas and should avoid becoming isolated in areas away from the port area of the city. We strongly recommend you avoid the city centre. If you chose to visit, please beware that you may be targeted for theft, robbery, or assault”, the football team Liverpool FC tweeted yesterday, 6 September 2022. They are referring to Naples, where the Champions League game (ended with a result 4-1 for Napoli) between Liverpool FC and SSC Napoli took place tonight, 7 September 2022. To be precise, it was Liverpool FC Help who posted the tweet. That is the official and verified account for LFC Fan Services, followed by 41.7 followers.

More than 2.000 Liverpool supporters were expected in Naples. The tweets aimed to give useful information to Liverpool’s supporters outgoing to the game. “Supporters arriving in Naples prior to match day should remain in their respective hotel to drink and eat. You are strongly advised not to wear team colours when travelling”, they also added.

However, soon Napoli supporters took the tweet as highly offensive. This is why so many of them commented “Respect Napoli” on Liverpool’s social media accounts, especially on Instagram and TikTok. Many supporters tried to show with the backing of data and figures that Naples is not how Liverpool displayed it. Furthermore, these types of public statements, besides being outrageous, continue to nourish prejudice and stereotypes, especially in the case of a city that already suffers from an unfounded bad reputation. Not to mention that data refer that some British cities have higher rates than Naples for danger and crime. Numbeo’s database, for instance, maintains that Bradford, Coventry and Birmingham are more dangerous cities than Naples.

During the press conference, the football manager of the Premier League club Liverpool, Jürgen Klopp, answered the journalist: “That is an embarrassing question from you. You want to create headlines; I really do not understand it”. And he goes on to ask the journalist, “Are you from Napoli? Do you think it is a dangerous city? I do not know”. In fact, Klopp holds he does not get to experience any dangers in Naples since he stays in a protected environment. However, he also adds: “You know exactly what people are talking about. If some supporters meet some supporters, something can happen that has nothing to do with the city”.

Even if that was true and Liverpool’s post was not meant to be offensive, this would not change its effect. Once again, football proved divisive when its final goal should be to create a sense of cohesion and mutual respect.

Liverpool – More Than a Football Club and World-famous Band