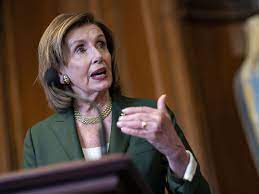 Pelosi, the highest-ranked elected US official to visit Taiwan in 25 years, said her trip “in no way” contradicts official US policy, which recognizes “one China” and does not officially recognize Taiwan as an independent state. US House of Representatives Speaker Nancy Pelosi landed in Taiwan aboard a US military aircraft late on Tuesday. She and her delegation disembarked from a US Air Force transport plan at Songshan Airport in downtown Taipei and were greeted by Taiwan's foreign minister, Joseph Wu and Sandra Oudkirk, the top United States representative in Taiwan.

Chinese warplanes buzzed the line dividing the Taiwan Strait on Tuesday before her arrival. China's leadership had warned against the visit by Pelosi, who is second in the line of succession to the US presidency and has been a long-time critic of Beijing. In the latest rhetorical attack, Chinese Foreign Minister Wang Yi said on Tuesday that US politicians who "play with fire" regarding the Taiwan issue will "come to no good end".

The United States said on Monday it would not be intimidated by what it labelled Chinese “sabre rattling”. Most of Pelosi’s planned meetings, including with President Tsai Ing-wen, were scheduled for Wednesday, a person familiar with her itinerary said. Four sources said she was scheduled on Wednesday afternoon to meet a group of activists who are well versed about China’s human rights record. Taiwan’s foreign ministry said it had no comment on reports of Pelosi’s travel plans, while her office has also kept silent.

In addition to Chinese planes flying close to the median line of the sensitive waterway on Tuesday morning, several Chinese warships had also remained close to the unofficial dividing line since Monday, a source said. The White House warned China against overreacting to a trip by US House Speaker Nancy Pelosi to Taiwan, saying she has every right to visit the self-ruled island despite Beijing viewing it as a highly provocative challenge to their integrity.

China has been in communication with the United States over Pelosi’s visit to Taiwan, Chinese foreign ministry spokesperson Hua Chunying said on Tuesday, according to sources. Stressing China’s solemn position, Chinese Foreign Minister Yi had warned that US politicians who selfishly play with fire on the Taiwan question will become enemies to 1.4 billion Chinese people and will not be meeting a good end, as per Chinese state media outlets.

Pelosi says the visit shows the US 'unwavering commitment' to Taiwan. "Our congressional delegation's visit to Taiwan honours America's unwavering commitment to supporting Taiwan's vibrant democracy," the most senior US legislator said in a statement moments after her plane landed. Our visit is one of several Congressional delegations to Taiwan – and it in no way contradicts long standing United States policy, guided by the Taiwan Relations Act of 1979, US-China Joint Communiques and the Six Assurances, says Pelosi.

Eight US fighter jets and five refueling planes took off from the US military base, and may be going to provide parameter security for Pelosi’s plane, reported Japanese media. Meanwhile, China has suspended imports from 35 Taiwanese exporters of biscuits and pastries since Monday, in a warning salvo to the self-governed island ahead of a potential visit to Taiwan by Nancy Pelosi.

The website of Taiwan’s presidential office received an overseas cyber attack on Tuesday and was at one point malfunctioning, Reuters reported citing a source. Taipei’s Taoyuan Airport received 3 bomb threats that are believed to be about disrupting Pelosi’s visit, according to Taiwanese media. China increased its military activity around Taiwan tonight ahead of the arrival of Pelosi, according to ABC.