The Beirut port silo has been Burning for two Weeks, four Towers Collapsed 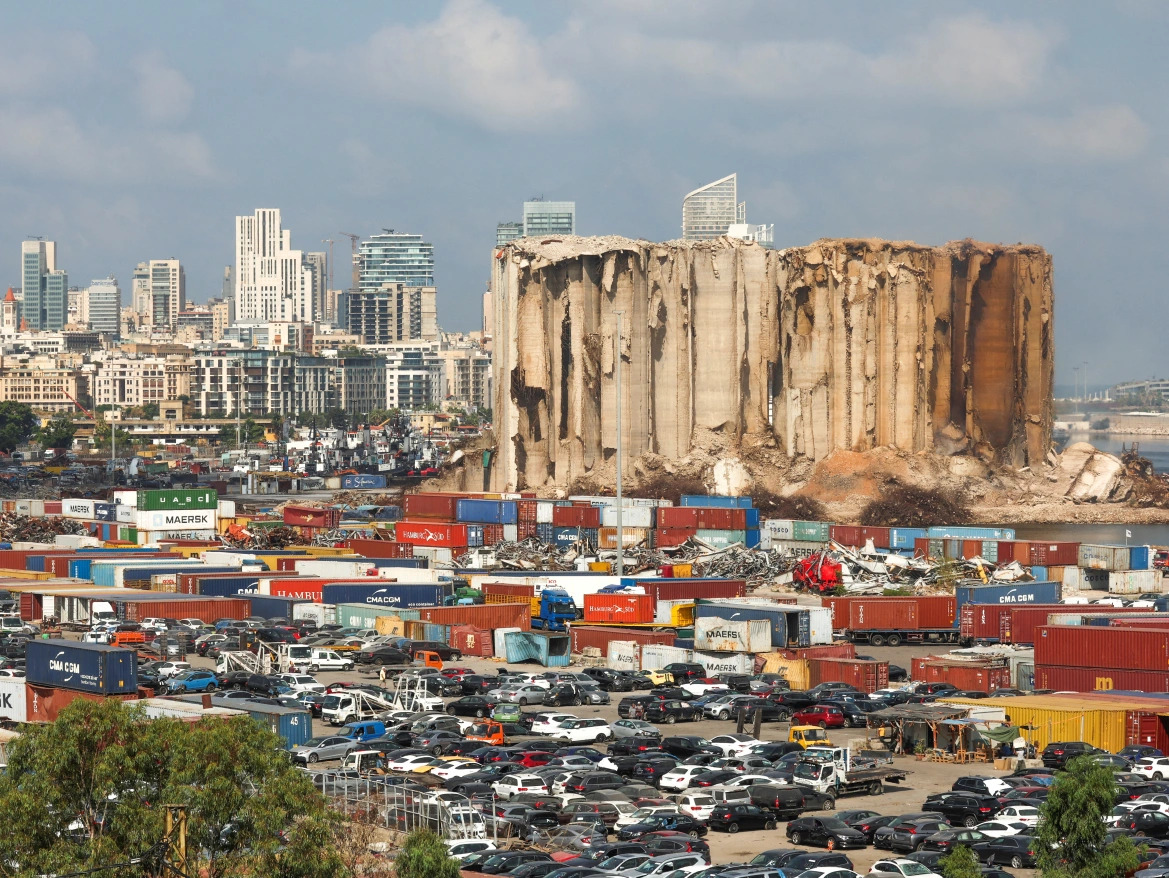 For the past two weeks, Beirut’s exploded silo has been burning non-stop. The firefighters haven’t been able to put it down. Four towers have collapsed so far. Experts are expecting more collapses.

Two towers from the giant Beirut port silo fell apart Thursday, which also marks the second anniversary of the explosion. The enormous silo had been burning for two weeks prior to the collapse.

The Lebanese Prime Minister, Najib Mikati pointed out that the silo would fall apart at any time. Two towers from the northern section initially collapsed on Sunday, marking four collapsed towers in total.

After the first collapse, the public was advised by experts and the health ministry to wear masks due to the large dust cloud caused by the collapse, as well as, to close all windows and to stay indoors, because of dangers that more silos would fall apart, and they did.

In April, the Lebanese government released a statement to demolish the silos. A decision that angered many victims’ families and citizens who consider the silos to be a memorial and evidence of this crime.

Ali Hamie, minister of public works and transports, told Al Mayadeen that the second collapse of the silos was "expected according to government technical reports."

Hamie also added that the majority of towers are to collapse sooner or later.

"We are determined to rebuild it," Hamieh said while explaining that the silo is not considered a crime scene according to a judicial statement.

The large historic 50-year-old silos are said to have absorbed a significant impact of the Beirut blast which was a result of tons of burning ammonium nitrate, unsafely stored at the port since 2013, killing 218 people and injuring 7 thousand others.

A protest was launched on the two-year anniversary of the blast. A protester that didn’t want his name mentioned, told The Social Talks, “we demand justice, we refuse the death and the culture of surrendering to those who claim to be in service of the people.”

“We demand justice and accountability for those who committed that crime,” he added.

Samer al-Khoury, a protester, told Reuters "Seeing the smoke coming out – especially that I was here during the blast – triggers a very bad memory. It was the same smoke coming from the silos up to the sky.”

The protesters, which included families of the victims, peacefully marched through multiple places in Beirut, especially in front of the French Embassy, Lebanon’s former colonizer, to push the U.N. Human Rights Council to investigate the explosion.

However, Aya Majzoub, Human Rights Watch researcher said that France, for political reasons, had blocked efforts to set up an external investigation.

The protester we spoke to earlier believes that “it depends on the political realities and aspects. It has been proved that justice and humanity serve politics, a very sad reality!”

An investigation was initially happening until Tarek Bitar, the judge in charge of the Lebanese-side investigation, called senior government officials for questioning. An action that led to complaints by MPs Ghazi Zeaiter and Ali Hassan Khalil, being filed against Bitar, demanding his dismissal.

Despite Bitar still being unremoved from his position, the judge’s hands are tied and he hasn't moved forward with the investigation.

Human Rights Watch released a statement on Wednesday, calling the “United Nations Human Rights Council should pass a resolution at its September 2022 session to create an impartial fact-finding mission into the Beirut port explosion.”

The statement was signed by 11 human rights groups including Amnesty International and HRW.

“Avoiding Politicization is the Only Way to Reach the Truth”

Many Lebanese citizens believe Hezbollah is partially responsible for the explosion, considering that they allegedly “stored” the ammonium nitrate.

Sayyed Hassan Nasrallah, secretary general of Hezbollah, said in a speech “Several political sides and media outlets in Lebanon are to blame for politically investing since the first hours of the national tragedy. They have been horribly exploiting the pains of families who missed their beloved ones in a bid to settle their accounts with Hezbollah.”

“You have to take this case out of a political investment if you want to reach the truth,” Nasrallah added.

Between the mourning of those who lost their loved ones and the victims still suffering from their injuries, the people want to know the truth. In an environment of blame, silence of the international community and no investigation, it is not clear if the truth will come out soon.