With organized attempts by the most conservative opposition to paralyse the administration and overthrow him, Pedro Castillo spent 16 months in office under siege. The opposition's demand for his removal was discussed in the body's plenary session just hours before it was made due to the president's numerous errors and problematic nominations, retreat from his pledges of "deep reform," schism with friends, and unlawful decision to dissolve the Parliament.

In a recorded speech he read on Wednesday, he claimed that the "most extreme political opponents are united with the sole purpose of failing the government so that they can take power without having won an election." He then concluded that he is dissolving Parliament, establishing an emergency government, calling elections for a Constituent National Assembly, and drafting a new Constitution to defend democracy. And even though he had previously spoken before the Organization of American States (under the aegis of the US), where he had frequently and firmly denied this prospect, he now requested help to stop the opposition from engaging in a "democratic distraction." 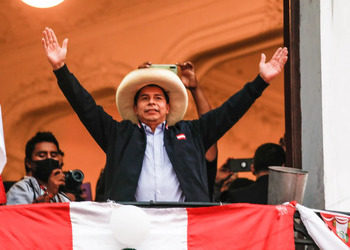 This was Castillo's response to the opposition's third attempt to have him removed from office for being (this time) under investigation by the Attorney General's Office for corruption and hence "morally unfit" to retain office. An attempt that was far from guaranteed to be successful. The coalition only needed two more votes—42—to escape the 87-vote majority (out of 130) required to pass the impeachment. Furthermore, the opposition's threats that "now we either kill or die" were directed at its more moderate members demonstrating that it had not put up a strong enough front.

No matter how lawful or constitutional the impeachment procedure was or how it turned out, Castillo's action brought up memories of Fujimori's 1992 self-coup. Castillo was now left on his own when back before he had the backing of the military, businesspeople, and media. Even the Marxist-Leninist party Free Peru PL, of which he was a candidate (and from which he soon distanced himself), condemned his action as a "coup," and neither his closest allies nor ministers supported him. His dismissal was thus accepted by 101 votes in the Parliamentary vote that followed his announcements.

In response, the army, police, and Constitutional Court refused to obey his order. Castillo was detained and put in jail. He is being investigated by the prosecutor's office for obstruction and conspiracy. And on the same day, Dina Boluarte, his vice-president, was sworn in as president with support from nearly all political forces. Politically inexperienced and having lost ground, Castillo either decided on his own to make a desperate exit that would surely lead him to exile or prison, or he was deceived by his allies who promised to support the dissolution of Parliament has agreed with a section of the opposition to extort him an hour earlier and mostly with well-founded accusations.