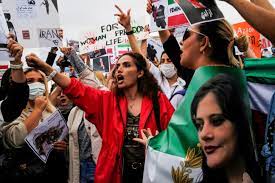 Amini's killing on September 16 sparked protests, demonstrating the defiance of many young Iranians against the clerical elite, ruling the country. Overcame the atmosphere of fear that kept the opposition from revolting against the Islamic Revolution. Since then, Iranian women of all ages, have defied the mullahs (cleric elites) in power by taking the streets with the slogan "women, life, liberty." They have defied armed security agents, chopped their hair as a sign of defiance, as it is considered by Islamic authorities as forbidden, burned their headscarves, and had an active presence on social media, in order to promote their struggle to the rest of the world.

Iranian authorities interpret the uprising, as fostered by foreign enemies, especially the United States. Who described Amini's death as a result of medical conditions. While accusing armed separatists of committing acts of terrorism. The minorities, mostly the Kurds in the North-West part of Iran.

Iran has a population of 85 million people, more than two-thirds of whom are under 30. Even if the most recent protests cease, the establishment may face similar situations in the future due to the youth's lack of fear against the regime. According to rights groups, security forces have reacted violently against the protestors, killing at least 300 of them, including 45 kids, while injuring thousands, and making tens of thousands of arrests. According to videos uploaded on social media, security agents have invaded multiple schools around the nation and detained schoolgirls who were protesting. Applying state security forces and using tear gas in a plethora of Tehrani schools.

Even though, the Iranian government denies any death of underage people during the protests. Human Rights Activists in Iran (HRA) report that since the protests that started on September 16, spurred by the death of Mahsa Amini, 68 children have been detained by the police, of whom 18 of them have died.

Seven weeks of protests in Iran have resulted in arrests, violence, and an increasing death toll of Iranian civilians. Nationwide protesters, many of whom are kids or even young children in school, are standing their ground. What do they want, and why are they prepared to use any measure to obtain it?

In an interview with CNN, Iranian activist Masih Alinejad says that “The nation's current rebellion is simply the beginning of the Islamic Republic's demise. It is unacceptable for the government to execute toddlers, teenagers, or schoolgirls in the world today because they dance, show their hair, sing, or just desire a normal lifestyle.

"The mandatory hijab is like the Berlin Wall: once it falls, the Islamic Republic will be destroyed," they continued. The mullahs are terrified as a result. Iran now has millions of women and girls standing shoulder to shoulder and declaring, "No. We are prepared to die, but we will not endure this humiliation.”

Human rights advocates worry that a wave of executions and life sentences will be handed down by the courts in the coming weeks as a result of 227 Iranian lawmakers urging the judiciary to "deal decisively with the perpetrators of these crimes and with all those who assisted in the crimes and provoked rioters" on November 6. Even though there is opposition from Iran's more moderate politicians, against harsh punishment for protesters. As well as, in favour of a change in the obligatory hijab law.  The government has declared that it will hold trials for the 1,000 protestors detained in Tehran. The regime may also execute a rapper who expressed outrage at Mahsa Amini's passing. As the dictatorship plans public trials for protestors and Iranian parliamentarians demand heavy punishment, the UN asks for international intervention.

With the situation constantly escalating and with the regime unwilling to back down. In fear of a compromise showing signs of weakness, while the protests keep expanding throughout Iran, from cities to rural areas. UN’s concerns are more than justified.