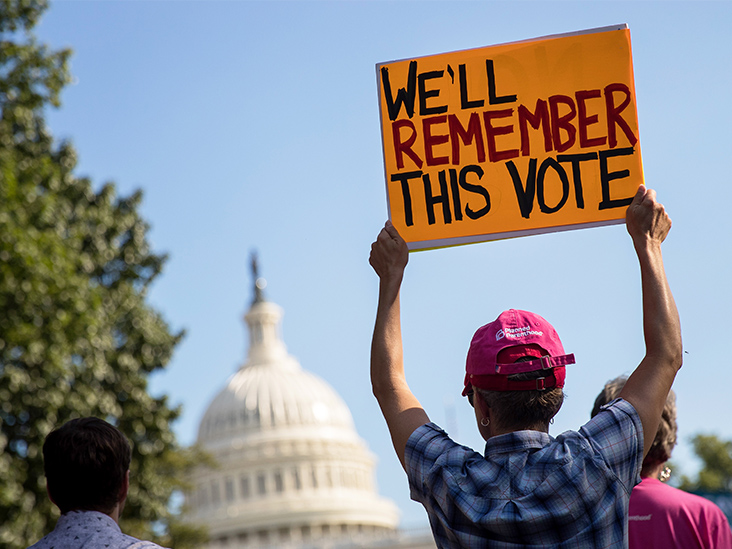 Abortion is not mentioned in the Constitution, and no such right is implicitly protected by any constitutional clause, according to Justice Samuel Alito, who wrote the majority decision to overturn Roe v. Wade and Casey. It is time to adhere to the Constitution and hand back control of the abortion debate to the people's elected officials. Justices Neil Gorsuch, Brett Kavanaugh, Amy Coney Barrett, and Chief Justice John Roberts gave the majority vote.

Those who disagreed included Justices Elena Kagan, Sonia Sotomayor, and Stephen Breyer. They claimed in their statement that "Today's Court, that is, does not think there is anything of constitutional significance related to a woman's autonomy over her body and her life course. Even at the greatest personal and familial expense, the State has the power to order women to carry a pregnancy to term.

The overturning of a ruling law creates a seismic political and societal shift across the country. Abortions have been legal in the United States during the first two trimesters of pregnancy since the Roe decision in 1973. The Supreme Court ruled 50 years later that there is no longer a constitutional right to abortion and that each state is instead given the authority to establish its abortion regulations.

As a result, it is expected that roughly half of the states in the US will outlaw or severely restrict access to abortion. The prediction comes true tragically since there are currently 14 states that have officially outlawed the surgery. Tens of millions of people across the nation will be significantly impacted by the new legislation, and more may change in the coming weeks. Some of these people may have to travel across state lines to access reproductive health care.

Effects of Overturn on Health Insurance

The subject of abortion has always been sensitive and controversial. Even when the surgery was covered by health insurance under Roe's legalization, there were restrictions. In a CNBC article, it is stated that "many states limit what insurance can cover and a centuries federal rule prohibits the use of federal funding for abortions, meaning that women on Medicaid and Medicare were frequently not covered when it came to pregnancy terminations." Following the Supreme Court’s decision, coverage is likely to become progressively harder to find.

"State-regulated insurers in areas where abortion is illegal will have to cease coverage of abortions to remain following state criminal law," said Caitlin Donovan, a spokesman for the National Patient Advocate Foundation.

Without health insurance, medical needs can generally be very expensive. There are two basic ways to end a pregnancy safely, according to Planned Parenthood: medicine (a two-drug prescription of mifepristone and misoprostol), or surgical abortions. Over half of all abortions are performed with medication, which is safe to use during the first 10 weeks of pregnancy. The cost of the medication without insurance might reach $750. Surgical abortion may cost more than $2,000 out of pocket in more severe circumstances.

How Abortion Coverage Operated Before

As previously indicated, abortion coverage was limited even before the ruling was overturned. Where you lived and the kind of plan you had had a significant impact.

Abortion coverage is now available to the majority of Americans with employer-based health insurance, although it is currently at risk. Some legislators want to eliminate the coverage and are attempting to forbid insurance companies from covering coverage for abortion in their plans. "For years, laws have severely limited coverage for persons covered under state or federal programs, including low-income women, public employees, literary families, Peace Corps volunteers, and Native Americans," according to the American Civil Liberties Union (ACLU). While more than 30 states have chosen not to do so, leaving hundreds of thousands of women without access to abortion coverage, Donovan said that states can choose to utilize their budgets to supplement their

How Coverage May Modify

Receiving coverage will soon be even more challenging than if it wasn't already. Starting, there will be no insurance coverage in areas where abortion is now prohibited, except rape, incest, or a threat to the mother's life. Unknown are the specifics of how those situations will be found and accepted. Donovan continued, "Some states might not even permit such exceptions."

According to Joelle Abramowitz, an assistant research scientist at the University of Michigan, certain companies may be able to continue their coverage for abortion if they self-fund their health insurance plan, which means they pay the majority of the costs associated with benefit claims.

It is advised to call your insurance provider and inquire about the coverage of abortions as a precaution.

Getting an Abortion Outside of Your State

Even if you have insurance, you might need to travel to another state for an operation if abortions are prohibited in your state. To see a doctor in another state in that scenario, you might have to go "out of network" on your health insurance plan.

Since out-of-network coverage is less reliable, some health plans don't even offer it, according to Abramowitz. In some cases, paying a provider directly out of pocket is less expensive than using an out-of-network insurance alternative. However, it is once more advised that you give your insurance company a call and find out if you have out-of-network benefits, how they operate, and whether there are any in-network abortion doctors in another state.

To receive a medication abortion, it is also possible to virtually consult a medical professional in another state. In these situations, your medication may be mailed to you or you may be required to pick it up, according to a CNBC article. This choice was also not exempt due to the states gaining power as a result of the overturn. Currently, receiving medication prescribed during a telehealth visit is prohibited in 19 states.

The Supreme Court's decision to overturn Roe has weighted the game against women and will continue to do so.

Supreme Court’s Draft Opinion on Roe v. Wade, Anticipation of Future of US