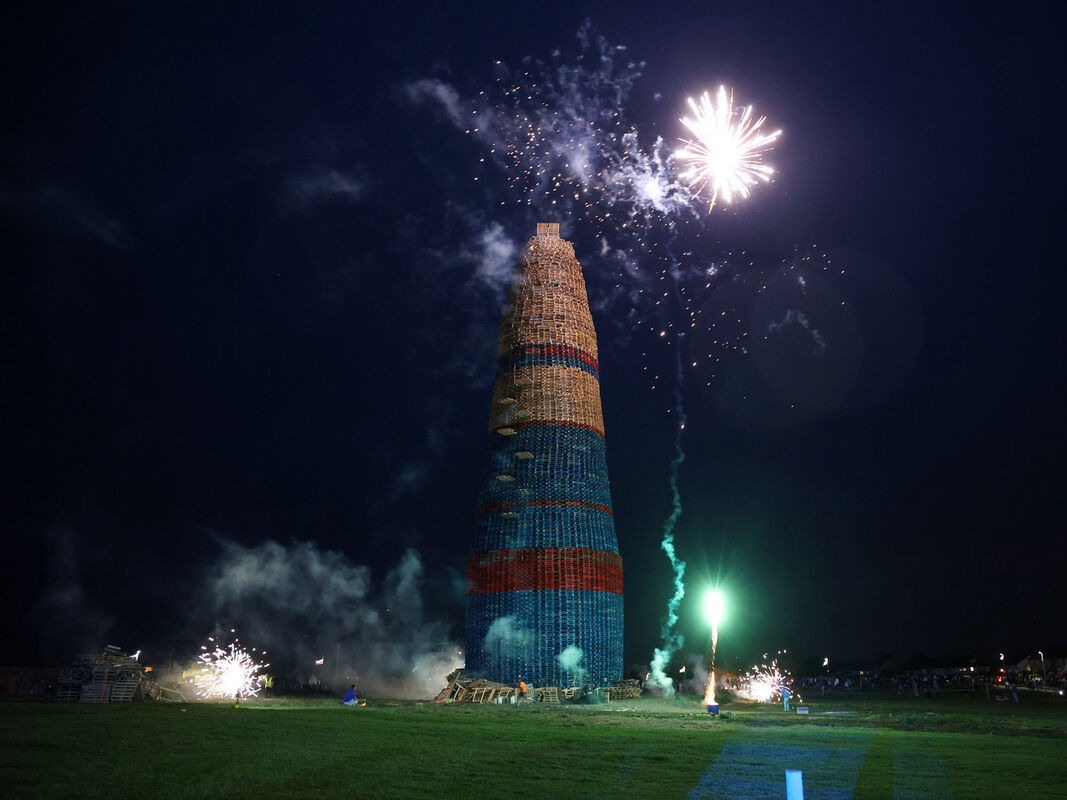 Every year on the night of July 11th, bonfires are lit in unionist areas across Northern Ireland. They begin the celebration of 12th July, the anniversary of the Battle of the Boyne in 1690 when the Protestant William of Orange - also known as King Billy - defeated Catholic King James II. Large fires were lit to welcome and guide William of Orange to battle, according to legend.

It is Wiliam of Orange who the Orange Order is called after. The Orange Order is a conservative, British unionist and Ulster loyalist organisation. Therefore, it has traditionally opposed Irish nationalism and republicanism and campaigned against Scottish independence. According to the Order, the core values of "Orangeism" are the promotion of the Protestant faith, maintaining the union between Great Britain and Northern Ireland and carrying out service to the British Crown as a community.

Every year, the Order help to build the pyres for the bonfires and organise large parades on 12th July. They claim these activities are a celebration of Protestant culture and heritage. However, the predominantly Catholic republican community in Northern Ireland condemn the celebrations annually, calling them sectarian and triumphalist.

This criticism came to a head this year due to a number of incidents regarding the bonfires. Before the weekend of festivities, the Craigyhill bonfire in Larne, County Antrim, succeeded in its mission to break the world record for the largest ever pyre. After measuring, their bonfire reached a height of 61.68m (or 202.37208ft, four feet more than the previous world record).

While merely the size alone drew criticism from nationalist communities, this was further amplified when another pyre very close by in Antiville estate in Larne, nearing 15 metres (50ft) was erected. A man in his 30s died a few days before the official celebrations when he fell off the Antiville pyre when building it.

To make matters worse, there were multiple pyres across the North that had election posters of candidates from non-unionist political parties stuck to them, such as Sinn Féin (the nationalist republican party) and the Alliance Party (a non-sectarian, centrist party).

Sinn Féin Councillor Gary McCleave tweeted an image of the pyre with his election poster stuck on it in Highfield in Belfast before it was lit, saying “Tonight I am having to answer questions from my children who came across this on social media why their daddy is on a bonfire to be burnt. This is not culture, it is a hate crime. Those within political unionism need to show leadership & stand up against this sectarian hatred.”

The Highfield bonfire also had a poster with “KAT” written on it, an acronym for “Kill All Taigs”. This is a derogatory term for republican Catholics, coming from the Irish name Tadgh/Taig (the Irish language word for the name Timothy).

A bonfire in Carrickfergus in County Antrim attracted attention from political figures when it was discovered that effigies of the Sinn Féin leader and deputy leader Mary Lou McDonald and Michelle O’Neill, alongside the leader of the Alliance Party Naomi Long, were hung from the pyre and burned on the night of 11th July. In response, Naomi Long tweeted a statement:

“So, having become accustomed to seeing my posters burned on bonfires, I honestly thought nothing could shock me anymore.  However, late last night I received photos of effigies of me, @moneillsf and @MaryLouMcDonald hanged on the bonfire at Glenfield in Carrickfergus. I'm not sharing the images due to risk of distressing families who have lost loved ones by suicide. And because they are utterly sick. I will, however, be sharing them and the pictures of the bonfire builders standing proudly in front of their creation with the police. These were not last minute additions. There are photos of a children's "fun day" taking place at this fire while our effigies were hanging on it. Some local businesses even sponsored it. What kind of parent would see that and think it's acceptable for their child to see? I felt physically sick at those photos - not just at the effigies but at the festering hatred and sectarianism they represent; hatred that not only persists in our community but is being passed on to the next generation as normal. This has to stop.Our children deserve better”.

The Police Service of Northern Ireland had said earlier in the day on Tuesday this week that it would be "gathering evidence" after it received a number of complaints about flags, effigies, election posters, and other emblems being placed on bonfires.

The images of the effigies of the female politicians made headlines across the North, the Republic of Ireland and the UK and unionists responded. Ulster Unionist Party leader Doug Beattie said the effigies were utterly vile and did not represent the union and unionist culture he believed in.

The secretary of the Orange Order, Reverend Mervyn Gibson, described them as hate crimes, telling Good Morning Ulster on Friday this week, “Going back to posters and effigies, there is no question about that, they, for my mind, should be a hate crime. [..] if you burn an effigy or burn a photograph of someone else, you obviously dislike them so much you hate them, so that would be for me a hate crime."

Irish Language To Become An Official Language In Northern Ireland