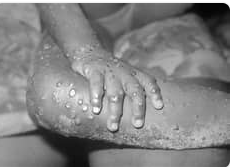 Besides the infamous COVID-19, another major virus that has been spreading this year is monkeypox, which was originally discovered in Africa. However, the virus has recently reached 21 countries including the UK, Spain, Australia, Canada, and the U.S. Monkeypox almost was never in any headlines until it reached outside of Africa.

Presently, almost all monkeypox cases are related to international travelling to countries that have the virus. Some common signs and symptoms are fever, chills, and headaches. If people show symptoms, they usually develop a rash within four days or less and the sickness lasts for about two to four weeks. Monkeypox is very similar to smallpox, so the medicine for smallpox can be used for heavy illnesses. However, there is still no medicine or any vaccines specifically for monkeypox prevention. Doctors and scientists are advising anyone that catches the virus to be isolated until fully recovering, including fully healed skin with a newly formed layer. People are advised to stay at home alone as much as possible or stay with people who also have the virus to prevent it from spreading to others.

The World Health Organisation (WHO), an organisation that ensures people from all around the world are as healthy as possible and receive accurate health information, believes that the name monkeypox is not appropriate. One issue that WHO pays attention to is the accurate portrayal of information about health including appropriate names for diseases. Media is bigger and more accessible than ever; false information can spread rapidly and people believe a lot of what they read and see online. Health information is always very important and people need to check the facts, like the name of a disease or a virus before sharing information on social media or the internet.

“Once disease names are established in common usage through the Internet and social media, they are difficult to change, even if an inappropriate name is being used,” is stated on WHO’s website.

Depending on the disease or the virus WHO investigates to find an appropriate name for example respiratory disease, neurologic syndrome, watery diarrhea.

“The best practices state that a disease name should consist of generic descriptive terms, based on the symptoms that the disease causes,” according to WHO’s website.

It's important to have an appropriate name for a disease or a virus because names can be discriminating and have a big impact on those groups or countries affected. For example, the media has been using the name monkeypox as an African disease, just like COVID-19 was called the Chinese virus. These names can affect those groups by blaming those people and countries for the viruses, which raises hate towards them. WHO is still investigating a new name for the monkeypox virus in order for African people not to face any discrimination. WHO believes that monkeypox is not an accurate name for a virus as it does not describe or tell what the virus or disease is.