Arts And Culture Of Mithila 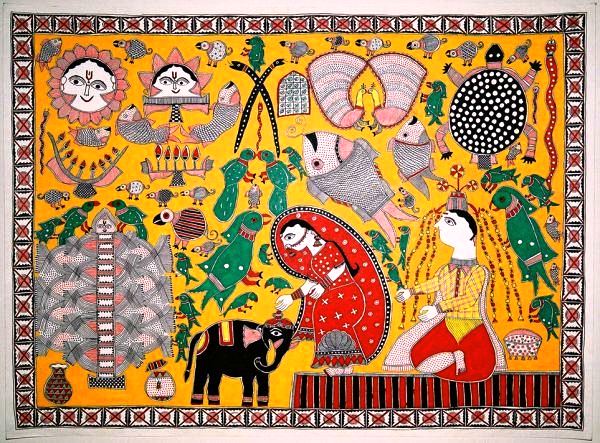 India has been a diverse country for ages. It holds several religions, castes, cultures, and languages. One of the most influencing Indian cultures is “Mithilanchal”.

Mithila or Maithil culture refers to the culture which originated in the Mithila region. The area is covered by Mithila is Darbhanga, Kosi, Purnia, Santhal, Pargana, Bhagalpur, Munger of India, and some districts of Nepal.

It is surrounded by the Himalayan range in the north, by the river Kosi in the East, Ganga in the South, and Gandaki in the west.

Mithila culture is famous for its dance, headgear (Paag), festivals, Madhubani Paintings, cuisine, and most importantly, the life which was spent by Buddha and Mahavir. Both Mahavir and Buddha have lived and discoursed in Mithila.

In Bodh Gaya, Gautama Buddha attained enlightenment under the tree, known as Bodhi Tree. Due to the influence of Gautam Buddha and his travels and teachings the world's first university Nalanda, was established. It ran successfully for 600 years, and around 3 thousand international students studied.

Lord Mahavira was the last Tirthankara Jainism, he was born in Bihar in 599 B.C. Mahavira was known for his possessed transcendental knowledge.

Today we will discuss about the arts and culture of Mithila (Bihar), which is very famous all over the world.

Mithila art is one of the most famous arts. During the wedding, one painting is made that is called Khobar. Khobar or the floor drawings are made, to depict fertility symbols. Kohbar paintings during the marriage have been considered as an expression of women.

After marriage, many games are played in the Kohbar room, called “Naina Jogin” (one-eyed, veiled women) is one of them, which is famous and compulsory for newlyweds to play.

These wall paintings of Madhubani paintings were famous during the festivals like Diwali, Dussehra, and Holi. Women used to paint their houses. For every festival, there were different designs and patterns. These paintings wouldn’t last forever due to the monsoon and rain, it didn’t last longer than four to five days.

In Mithila paintings, there are two types of styles, ‘Bharni’ and Kachhini. The ‘Bharni’ style in which Hindu gods are made and is also used for Kohbar. The Kachhni resembles Bengal’s Kantha.

Until the 1960s, when Mithila paintings were not commercialized, these styles Bharni and Kachhni were mainly done by Brahman and Kayasth women.

It is more preferred as Mithila painting since the painting covers the entire region of Mithila. Not only in Mithila it is more famous in Nepal as the former capital of the Kingdom of Mithila, Janakpur has emerged as the center for both countries.

Mithila is more famous for being the birthplace of Goddess Sita. Due to the birth of Goddess Sita in Mithila, every year Janki Nawami is celebrated in Nepal. It is believed that King Janak of Mithila from Ramayana hired local artists of Mithila art to decorate the unique Mithila art for his daughter Sita’s wedding Sita to Rama.

Different variants of Mithila paintings were done, on walls coated with mud and cow dung. In that painting, no space is left empty, the gaps are filled by animals, birds, Radha Krishna, Ganesha, Vishnu, Sita, and Ram, etc. The colors which are used in the painting are bright colors like red, yellow, green and black, etc. These arts are made upon canvas, sarees, bags, lamps, and many more decorated items are made. The paintings are done using fingers, brushes, matchsticks, natural dyes, and nib pencils.

Mithila art lovers are from different countries like the United States of America, the United Kingdom, Russia, and Australia.

Culture of Mithila like Headgear (Paag), Dance, Cuisine and Festivals

Paag is worn, by the Maithil people. Most people wear this Paag at wedding functions or on special occasions. It symbolizes respect and honor and a significant part of Maithil culture.

The famous folk dances of Mithila are ‘Jhijhiya’ and ‘Domkach’. Jhijhiya is mostly performed on Dussehra, which is dedicated to ‘Durga Bhairavi’.

If we talk about cuisine, the most famous cuisine of Mithila is ‘Litti Chokha’, which everyone has tried in their life.

The Maithili language was included in the eighth schedule of the Indian Constitution in 2003. It can be used in education and government. This language is also included as an optional paper in the UPSC exams.

Example- In the Maithili language- बियाहकऺ बादऺ ऊ पालऺतꣿ, in English it means- He/she nurture a boy after marriage.

Maithil Culture is more famous in “Darbhanga”. Darbhanga is also called the “Heart of Mithilanchal”. The Maithili language spoken in this region is the sweetest language in the world.

If people want to know more about Mithila culture, they should visit Bihar to learn that it has been the land of culture, literature, philosophy, and justice for centuries.