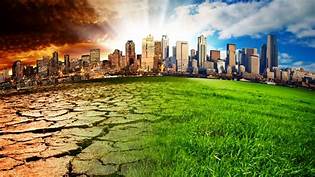 According to the IPCC (Intergovernmental Panel on Climate Change), climate change refers to a change in the state of the climate, identified by changes in the mean and/or the variability of its properties, and that persists for an extended period. It means climate transformation over time due to natural variability or caused by human activity.

On the other hand, the UN FCCC (United Nations Framework Convention on Climate Change) affirms that climate change refers to a change in climate indeed, attributable directly or indirectly to human activities, that alters the composition of the global atmosphere and that is in addition to natural climate variability observed over comparable periods.

These two definitions differ in explaining the triggering cause of the problem, one making reference only to humans and the other taking into consideration even other parameters and natural events. In general, the main causes of climate change are CO2 emissions, intensive farming, deforestation, and industrial production. Over time, these activities have produced enormous quantities of greenhouse gases that have been added to those already present in nature in the atmosphere. This slow but continuous process has increasingly fueled the greenhouse effect and the consequent warming of the globe.

This issue is very concerning for our health and even our survival on Earth; indeed, a balanced climate is essential for several different reasons. Among the many, we can say that it is fundamental for preventing natural disasters and protecting our wellbeing and biodiversity, which is the processes that support all life on Earth, including ours.

Biodiversity refers to a wide range of animals, plants, and microorganisms forming healthy ecosystems; we need to preserve the environment around us and provides both direct and indirect benefits to mankind which occur on both local and global scale. Benefits linked with the direct use of ecosystems are goods, such as food, medicine, fiber, building materials, and fuel. Indirect use values also known as services are atmospheric and climate regulation, pollination, and nutrient recycling. Finally, there are non-use values, which identify potential, existence, and bequest values, that is to say, the importance of knowing that something exists and that it will be there for future generations as well. The environment is also a source of inspiration and has a scientific and educational value as well as a spiritual and recreational one.

Today, we are witnessing multiple worrying events related to this change in climate, numerous floods, wildfires, melting glaciers, and over time, there will be extreme consequences that will deeply affect our existence, such as heat stress mortality, complete loss of some species and geographical areas due to the exponential increase in temperatures and the consequent rise of local extreme events. What is more concerning is the loss of biodiversity, caused by habitat destruction, pollution, overharvesting, and invasive species. This terrible phenomenon has vast consequences on the ecosystems of the world; species are indeed all linked one with the other through the so-called food chain, therefore, even the loss of only one specie could determine incredible problems.

It is therefore crucial that we step up, raise our voices, and join our forces to do our best to avoid at least partially the possibility of these events happening.

Starting from 1992, with the Rio Convention also known as Earth Summit, 150 countries decided to consider the possible environmental impact in all their policies and projects. States decided to cooperate at an internal level to ensure compliance with Agenda 21. The Kyoto Protocol adopted in 1997 has the objective of reducing greenhouse gas emissions, firstly from 2008 to 2012 to an average of -5% below 1990 levels, and subsequently from 2013 to 2020 to at least -18% below 1990. Another relevant agreement is the one signed in 2015 in Paris; as stated by Laurent Fabius, French Minister of Foreign Affairs, and International Development President of COP21 “This agreement will need to be differentiated, fair, sustainable, dynamic, balanced and legally binding, and will need to ensure that, in 2020, the global temperature does not rise by 2°C - or even 1.5°C - compared to the pre-industrial era because of greenhouse gas emissions”.

Nowadays, we are starting to talk more and more about sustainable development, which refers to a type of growth capable of respecting the environment, commonly defined as “development which meets the needs of the present without compromising the ability of future generations to meet their own needs”. Taking into consideration this definition, in 2015 the UN adopted the 17 Sustainable Development Goals forming part of the 2030 Agenda aimed at transforming our world. They substituted the 8 Millennium Development Goals, adopted by the UN General Assembly in 1990, they targeted the least developed countries, encouraging them to eradicate extreme poverty, achieve primary education, ensure maternal health and environmental sustainability, combat HIV, and reduce child mortality. Contrarily, the Sustainable Development Goals are directed at all the countries, not taking into consideration any type of distinction, and represent the world’s common effort towards the development of strategies and plans aimed at saving our planet. They have an economic, social, and environmental potential of producing desirable effects on the environment.

In the end, it is very important for all of us to understand and not underestimate the gravity of the situation, which if ignored will lead to unprecedented events, which in the centuries could even lead to the extinction of the human race. We have to be aware of the fact that even the smallest actions can benefit the Earth, for example consuming less meat, recycling, using less water, avoiding the excessive use of heating and air conditioning, and using sustainable transport are all little gestures, which in reality could make a big difference if implemented by all of us.

Nature is all we got and caring for it is the minimum we can do. Do not take it for granted, take action.