ENTRY OF FOREIGN UNIVERSITIES INTO INDIA 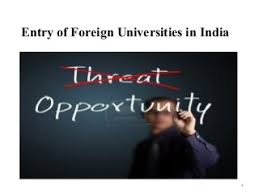 Education can be defined as knowledge that is instilled in the mind of the students. It is not only imparting knowledge but skills as well. The word education means 'to reduce.' Education can be either formal or informal. Formal education can bring in a lot of specialization. The success of education lies in harnessing the latent potential of an individual. On the other hand, formal education is delivered by deliberate people whose primary concentration is on skills and knowledge.

Education in India has historic sketching back to the ancient urban learning centers at TAXILA and NALANDA. Western education became ingrained into Indian society with the establishment of the British Raj.

India has made massive progress in expanding literacy to approximately two-thirds of its population. India's development in education is one of the main reasons behind the rise of its economy. Much of the progress in education has led to the development of private institutions. The priest class or the Brahmins were considered the sacred class and had the full right to receive education at a higher level. They were expected to impart the knowledge of religion, philosophy, and other ancillary branches while the warrior class or the Kshatriya was trained in various aspects of warfare.

In the business class, the Vaishyas were taught their trade, and the lowest class of the Shudras was generally deprived of educational advantages. The book of laws, Manusmrit, treaties on statecraft, and the Arthasastra were among the influential works of this era, reflecting the outlook and understanding of the world at the time. By the time of the visit of an Islamic scholar, ALBERNI.

India already had a sophisticated system of mathematics and science in place and had made several inventions and discoveries. With the arrival of the British Raj in India, a class of Westernized elite was versed in the western system of education that the British Raj in India had introduced. The system soon became solidified in India as a number of the primary, secondary and tertiary centers for education cropped up during the colonial era.

In India, around 340 Universities control over 5000 colleges, with few monitoring systems to provide higher education. The present higher education system does not serve the purpose for which it has been stated. In general, education itself has become so profitable that quality is lost in the increase of professional institutions. The quota system and politicization add fuel to the fire of the spoil system, thereby increasing unemployment. All-round development should be significant in education. But present-day education is neither imparting proper education nor improving the talent by which a student can achieve laurels in the field one is interested in. Undoubtedly, the present educational system is making engineers, doctors, lawyers, and other officers, but there is a lack of values.

The present educational system can not make students career-oriented as they lack job-oriented programs. India should aspire to hold a position at the international level. To achieve that goal, it should develop the concept of globalization in its educational institute. Finally, education should be for flowering personality but not for suppressing creativity or natural skills. In the globalized world, the opportunity for educated people is naturally in ample scope. That is how the world can develop peace, prosperity, and progress by able and skillful men.

Entry of foreign universities will stop the brain drain as good opportunities for the Indian students will be present in their own country. Researchers want adequate facilities and adequate funding to research to publish their findings in top journals.