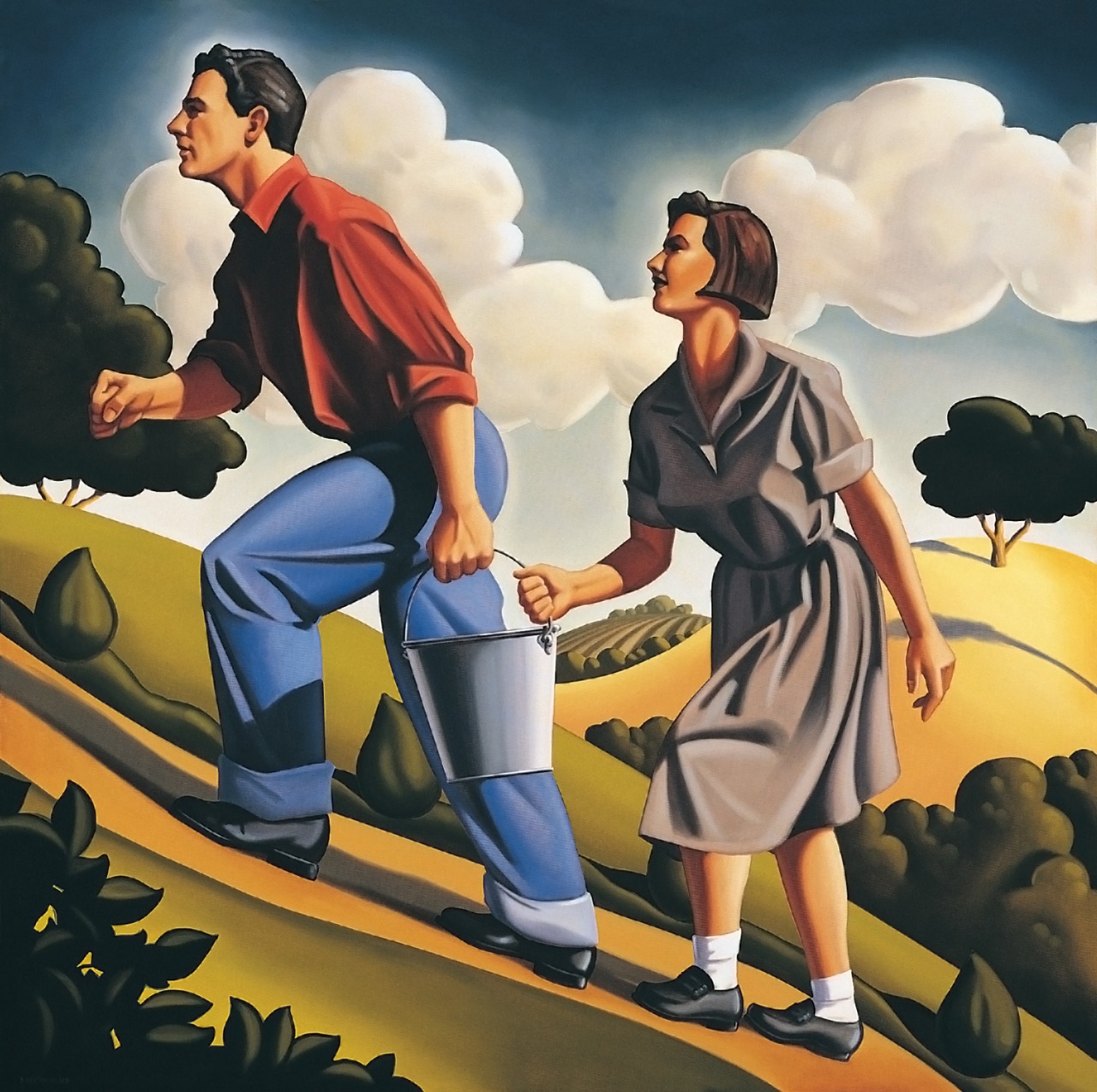 Imagine that you have to prepare a salad. It is a unique family salad recipe. But it turns out that you are short of ingredients. You have only a little or none at all. You open the refrigerator and see nothing: no eggs, no potatoes, no peas, and so on, according to the recipe.

You make a salad from what you have. Rather than what is left ... well, add some fantasy.

Quite a bit: if you imagine that the ingredients of the salad, the very same authentic salad in real time, are not needed, you can use the ones you have. Call the achieved result a "traditional salad" (and assure everyone of this), and voila, the festive dinner is ready!

When the victim becomes the killer, and the prey becomes the hunter, what happens then? Does this happen in real life? Or do we only have to pretend it's happening?

Having made such a small experiment on himself, each individual can taste a "real" ideological, and in fact family salad.

Reality is not exactly as we imagine it. Therefore, either we accept it as it is (then our "ideological" diet requires strength and effort of will), or we agree to the "a-la canteen" version of current everyday life (a little preliminary stimulation and heartburn never hurt).

A metasymbolic idea is a simplified statement of the generalization of a symbolic idea. It exists as a collection of culinary recipes of the human psyche. This is a "legitimate target" for the human behavior zone.

Thus, to achieve the goal, such methods as simplification of experience and idealization (in this case, everything) work. These two methods are related. Idealization always carries an element of simplification. A straight line on a plane is always the shortest path between two points in two-dimensional space. In this case, idealization bears the properties of schematization. A schema emerges that is used as an effective template to explain the surrounding reality to the individual or to simplify the prediction of the future: it should be so, and if it is not, then something is wrong with the context but not with the method of perception itself.

The methodology of perception and awareness of things around us is always important. Even if a person does not realize it. Our feelings and theories are always dependent on the fact that the Earth is round, that in a discrete world 2×2=4. So, for example, by trial and error, it is almost always possible to run out of the wrong options and achieve the goal.

But the idealization of objects or a class of sets of such objects and the subsequent perception of the world around us is something that we as humans find difficult to deal with.

Some examples of its application

The reality of life in social networks, Hollywood films, or political ideology is questionable. After all, the types of idealization listed above and many others are only a model of reality. Yes, of course, real facts are used here along with the ones whose empirical evidence is questionable.

Today, the increase in the intensity of informational pressure on a person and the turbulence of life, when events take place directly in front of an ordinary person, insinuates various methods of psychological protection from an overly active environment.

In social networks, an example of such a tool is Instagram stories. Stories are an important (perhaps even the most important) element of the operation of a modern social network that wants to succeed. But such stories have one very important element: it is mostly an idealization of how the owner of the social account behaves in everyday life. It is so to speak a declaration of intentions for the future, which sometimes happens in the presence of the person who makes the stories.

This essential element of the social network's existence should always be remembered by users when looking at someone's stories. It is especially true for children who do not yet have the life experience or for people with mental health problems. After all, idealization as a star model can cause depression or mood swings for such categories of users. Very often, their reality does not correspond to what these people can see around them every day. They cannot grasp the simple fact that most popular accounts on social networks are an idealization of consumer expectations. It is the effect of a wave that gradually gathers momentum.

In the media space of visualization and telecommunications, we can give an example of the image of the middle class in typical Hollywood films.

"Law Abiding Citizen", for example. Even in the title the directors of the blockbuster as positioned by the creators themselves, have already invested an idealized meaning. Putting your hand on your heart, how many "law-abiding citizens" do we know? Real law-abiding ones, not those who follow the law from nine in the morning to five in the evening five days a week.

It should be remembered that idealization is an essential method of not only theoretical or scientific knowledge of reality but also practical. A standard of measurement units or a prototype of some device or mechanism, for example.

A prototype is always a simulation of an ideal sample. We must understand that in the era of mass production, the production of goods in factories has its error. The same can be said about the media and propaganda. That is, they deviate from the initial ideal. This sometimes causes accidents or lawsuits against the manufacturer. And companies engaged in the industrial production of various goods know this and are ready for all kinds of surprises.

Stereotypes are another typical example of social protection from an aggressive environment. Idealization has its socio-cultural roots in people's religious beliefs. Good and Evil have absolute values. The concept became relative only with the advent of statistics and its integration into all sciences without exception.

Idealization methods are used to simplify the perception of an object. They are embedded in psychology therefore scientific analysis has a characteristic direction of development for a person. Only the anomalies of everyday life are not included in the psychology of perception and analysis of the environment. Idealization makes it possible to save the experience of everyday life.

An eloquent example from the recent past of another, this time socialist, an empire of the use of idealization to reduce social tensions and accelerate social transformation is the phenomenon of "equalization" in the USSR. It is some kind of Egalitarianism but way more populist. Faced with the problems of everyday life, the inability to satisfy the "bourgeois" (according to official propaganda) needs of the population, as well as amid the fact that the elite ("nomenclature" according to the good expression of historians of the Soviet "perestroika"), official propaganda was somehow forced to explain this to the "socialist population". The so-called «equalization" was one of the methods to explain the situation. This is a phenomenon in the life of the USSR when, regardless of what position a person held or professional skills he had, he received the same as others in terms of material and social benefits.

After Stalin's death, it was unofficially presented as a prerequisite for socialism. But this way of simplifying and idealizing reality, proposed by the propaganda machine of communism, turned out a bankrupt. In stores, regardless of the buyer's ability, there were only definite categories of goods available to everyone (but no more). But, as "ordinary communists" discovered, there were also specific shops for the party elite. And so in everything: from the provision of household goods to the availability of higher education for the children of ordinary citizens. That is, by using the idealization of "equalization" and mixing several ideological dogmas into it, propaganda tried to ensure support for the regime in the cheapest and most accessible way - by inventing a new stereotype that a person allegedly got from real life.

The price of error

Unfortunately, today we have to state the fact that idealization once a very crucial method of scientific and everyday knowledge, has become a tool of propaganda. This method is very often used as part of a hybrid effect on a person's consciousness and perception of surrounding events. Idealization is a convenient method for propaganda because it uses simplified facts and stereotypes of the everyday life of a person to protect himself from too much pressure from events and a constant flow of information. The human psyche and brain are not capable of processing such a flow of information without harming human health. Evolutionary mechanisms of survival very successfully use "reduction" and stereotyping of reality to be able to sort events on different "shelves" in a short time and continue to process information, because the next events are already waiting for a person, etc.

By making idealization part of the hybrid influence and propaganda narratives, government propagandists and the tabloid "yellow press" dealt a very sensual blow to the means of individual psychic protection of man. To keep up with life, you need to follow the events in the world around you. But such observation over time greatly exhausts the mechanisms of perception and protection of the human brain.

Over time, a person learns that some of the events that they managed to identify as old stereotypes turn out to be false. In such an array of data, it is almost impossible to immediately detect an error. Here, not only is the amount of data valuable, but also the speed with which it enters the brain. Detection of the error and its correction can happen too late when the psyche has already "attached" the next block of information to this "erroneous stereotype" thanks to idealization or simplification.

And it seems that in the future, this process will only accelerate and deepen thanks to the development of artificial intelligence, "deep fake" technologies, digital gadgets, and, against this background, a decrease in the ability of a person to think critically at the same speed at which data is generated and processed.