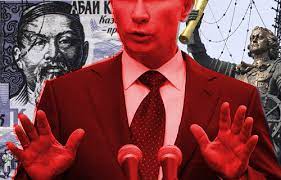 Today, the expression "hybrid war" will not surprise anyone, but current events have proven that this once theoretical threat has moved into the practical area. Was it dissatisfaction of China because of the "unipolar geopolitical order in the world", a consequence of the COVID-19 pandemic, which shocked the whole world, or the aftermath of imperialism and anti-Western policies of the dictator Putin regime, is not yet clear. But the fact remains: hybrid warfare, or influence, has become the reality of our daily lives.

Perhaps in the future, by studying today's events in the world, historians will at least roughly list the reasons for the hybrid wars of the beginning of the 21st century. Here, in the immediate environment where such events occur, people will always look for significant reasons for significant events.

The human psyche arranges in this way: the larger the events, the more significant the cause of these events should be.

Most likely, the hybrid wars phenomenon (the first cases documented in the last century) became possible only thanks to the development of technologies on the border between the present and the last century. What was "hybrid" in the former century has become "ordinary" in the conduct of hostilities in the current one. Of course, the "conventional" war of the 21st century is fundamentally different from the "conventional" war of the beginning of the last century. Just as the Great War of 1914-1918 differed in its scale and technical innovations from the "usual" at that time Franco-Prussian War of 1870-1871.

Why are hybrid wars so popular today? And what significantly differs them from the typical wars of the previous century?

First, hybrid warfare is comprehensive. In the country under the attack, no area of life would not be the target in such a war.

Secondly, such a war is cheap. It can be conducted in "peace" time without involving a regular army.

Thirdly, its methodology is significantly different from the wars of previous centuries.

It is this third point that interests us the most. Thanks to a change in methodology and the military paradigm, innocent short videos on TikTok are starting to be a threat to national security on par with an accidentally opened email that didn't end up in spam. But let us talk about everything step by step.

The three main elements of hybrid warfare – kinetic weapons, information or propaganda influence, and cyber-attacks – increase the variability of striking a potential enemy. Even without kinetic intervention, an attacker using a combination of disinformation and cyberattacks can significantly compromise a country's defense capabilities.

Modern methods of communication allow us to do this without investing large amounts of money. For example, the interference of the Russian Federation in the elections in the USA. The current state of telecommunications allows the enemy to wage a disinformation war among the population of another country. The goal of such intervention is to undermine citizens' trust in the authorities and international bodies.

Today, thanks to cyber troops, it has become possible to inflict devastating blows on critical and civilian infrastructure without the involvement of kinetic units. The example of Ukraine shows this very clearly. The Ne Petya virus: before the full-scale war in 2022, or already after the start of the full-scale invasion, most of the targeted hacker attacks were carried out either with the help of the Russian government or from the territory of China.

The methodology of using such a system with three main elements is quite complex. Each of the three elements can simultaneously play a central or secondary role. When there is no success on the kinetic front, the aggressor state can focus on disinformation. Or there is a situation when the enemy attacks in all three directions at the same time.

The defense of any country does not consist of the same, that is, heterogeneous, elements. Some of these elements are of primary importance. For example, kinetic troops. At first glance, some do not have such critical importance during the state defense against attack. For example, relatives and families of soldiers defending the country. In the 20th century, it was automatically believed that a soldier's defense of his country should be perceived accordingly by his relatives and friends, and they, in turn, should support him in every possible way when he is on the front line shedding blood for his country and his family. But today, the situation has changed radically. Thanks to the spread of social networks and the implementation of experience-proven programs to influence the mass consciousness of the defending country, the aggressor can create an absurd situation when the soldiers defending the country will appear in the eyes of relatives and friends as aggressors, and the aggressor, on the contrary, as a liberator.

Hybrid influence can strike at all heterogeneous elements of the country's defense system. It is also essential to understand here that the cyber army of the attacking country is also constantly attacking communications. Today, the speed of information dissemination is of strategic importance. The whole information during war or foreign propaganda aims at the population's emotional channels. The first impression, preferably a negative one, has a terrific effect when creating mass communication channels. This method is the most resource-intensive, but thanks to it, the aggressor can achieve an instant result. When a country suffers from attacks on all fronts, there are more options for an attack somewhere to lead to defeat.

Hybrid warfare is not a new type of warfare. Hybrid wars or conflicts happened before in the last century. It's just that during crises, human psychology perceives what directly threatens a person. We mean a physical threat. Most of the population does not perceive disinformation and fakes as an immediate threat in the conditions of a hybrid war. In this case, soft power tactics justify themselves: we perceived conflicts as wars of the old format. Although, the perception itself formed within the framework of ideology and misinformation. Any mass conflict with the use of violence and weapons has the characteristics of a hybrid in the 21st century.

•              The combination of modern warfare technologies allows such paradigms, which are asymmetric influences to strike at those areas that the enemy considers strategically vulnerable. Here, they operate according to the old principle – "the chain bursts at its weakest link."

•              The very threat of an attack is unpredictable. The enemy can change the attack vector in any direction: from the front to the psychological treatment of the population and then from a cyber-attack to critical infrastructure. When the country's defense gets used to such actions of the enemy, he can deliver an unexpected blow to the same critical infrastructure facilities, but already with the help of kinetic weapons. Many variations can be used here, but the main thing is that the attacks are planned, and the relevant units during such attacks have all the necessary equipment and outfit.

•              It will not be possible to protect oneself against an asymmetric threat. It's a systemic threat that targets sensitive areas, so it's cheap and effective.

•              There is no united front. The impact must be comprehensive. Kinetic, information, and cybernetic load are equivalent. Such a balance of influences makes achieving the goal more likely. This greatly reduces the cost of waging kinetic warfare itself. But it significantly increases the negative impact on the population from waging such a war. An unmotivated soldier or officer is more likely to surrender.

Some options for countering hybrid asymmetric impact from the enemy:

➢ Try to distance yourself as much as possible from the enemy's influence today. That is, try not to have too close economic, social, or political ties with him.

➢ Building a comprehensive system of protection of state and civil administration elements. The best way is regional defense, provided that allied countries take the same measures. For example, the Pacific region and the response of Japan, South Korea, Australia, the United States, New Zealand, and 12 other Indian Ocean countries to the Chinese threat.

➢ Investing in the development and strengthening of civil society institutions, especially in countries that still have significant problems with the transparency of the political sphere and corruption.

The absence of these and some other factors can be considered the reason for the successful, unfortunately, aggressive policy of the Kremlin in Eastern Europe. The US and NATO have focused their attention on Syria and Afghanistan, and Russia's election interference has further diverted America's attention from essential support for the region. As a result, Russia has tied up some areas of Europe with its economic and political influence, and the US and its allies have to start anew. Previously invested resources in the development of the region of Eastern Europe turned out to be either insufficient or lost. Everything has to be started from the beginning. This is the effect of asymmetric intervention.

Russian bot farms helped Trump get a seat in the White House. The financing of bot farms turned out to be not so large compared to the consequences of their activities. Billions of dollars turned out to be wasted. Eastern Europe cannot survive on its own in the aggressive Russian geopolitical space. Now such resources must be invested quickly and the amount must be larger. The effectiveness of such actions may raise doubts. Only a hybrid counter-intervention by NATO and its allies can slow down the negative consequences of Russia's aggressive destructive policy.

Modern politics is very changeable. The governments of countries are in a constantly changing dynamic situation. Turbulence has become a part of our life. In the war conditions in Europe, it is unlikely that it will be possible to quickly develop medium and long-term political and economic mechanisms of protection against the Russian hybrid war. Today it is more important to react rapidly to the crisis (and on the scale of Europe, quickly means pragmatically) and only then to develop a strategic development plan for the future. The plan must include energy independence and military security from further Russian interference. First of all, it should be developed considering the methodological paradigm that is the basis of conducting hybrid wars.

The most important question remains: will hybrid warfare remain the principal type of confrontation between states and organizations using violence or cognitive warfare come to the fore? Virtual space developers from Silicon Valley and Chinese military experts are pushing humanity in this direction inextricably from each other.