The Pen Is Mightier Than A Sword 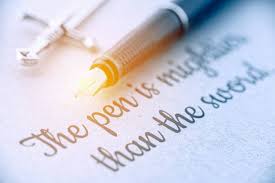 Pen and sword both symbolically define the brute's intellectual power and physical power. Both are powerful in their respective fields. But the question is which one is more conducive to the welfare of humanity. In the realm of the intellectual area, the pen is mightier. The poet and the philosopher have been blessed with imperishable truth. They have unraveled the mysterious laws of nature. Guided by the man has attained the height of civilization.

On the other hand, conflict is inherent nature in human life. History records that the Greeks and the Roman-built up empires with the dint of swords. They plundered the weak and plundered the helpless innocent members of humanity. Now the conclusion is obvious.

The victories won by the sword are subject to ruins, and the thoughts expressed by the intellectual persons are enduring and lasting. The power of the blade is vastly more ample than the sword. What a sharp-edged sword cannot do can be done by the minute tip. It implies that writing is much stronger than the power of hatred and war. A war directly ends in bringing the defeat of different people and a minute pen tip ends in getting education into being. Writing is priceless. Our generation has been blessed with writers who have been writing to bring revolutionary changes, which implies that education has the power to alter the rigidities of society. It helps bring charisma into the community and assists in demonstrating wellbeing of the organization.

John Keats and Mahatma Gandhi are some of the people who are examples of such mightier people who have been recognized for their charisma and have made people cry, speak and think. Their writings brought about revolutionary changes all across the globe and made a demographic change in the history of the world's civilization. Writers fought successfully with child marriage, sati pratha, honor killing, etc. It has created war and has created freedom. It has created war during peace and peace during war. Writing has united the nation to fight against evil. It has uniformly distributed stability all across the globe with the power of its charisma.

The power of writing has brought a hope of demolition of evil and victory of good deeds over evils. It has brought about acknowledgment to the society and has brought about reasoning in the people by awakening them. Evils keep the strong people away from the spotlight by diverting their minds, but the real heroes keep their target intact by keeping their minds focused. This proverb is sometimes similar to "UNEASY LIES THE HEAD THAT WEARS THE CROWN." The head that wears the crown is the head that takes the responsibility.

The head that takes the responsibility takes the oath of solving all problems no matter what the devil does. Thus, the power of writing can overcome and surpass all the evils with a touch of the tip of the pen on the mightier white paper that later demonstrates society's rules and regulations.