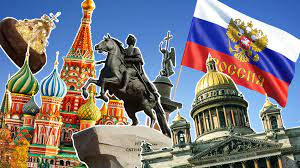 As a commodity, ideology has always existed in the Russian consumer market. Although Russia did not always have a consumer market in the contemporary sense, there was however enough ideology here. The country has existed as an empire throughout its past and present history. Even the realities of the 21st century cannot change that situation. The only way to modernize domestic life is to make yet another attempt to incite internal conflict and war. To the world, Russia has offered nothing but an ideology for export and a mass comradeship of the same philosophy for the domestic consumer market.

The Commoditization of Ideology

Ideology and propaganda are products of mass consumption in Russia. Not only do the Russians want it, but it also appears they are stuck in this situation for a long time. Whole generations grew up, lived, and died without going beyond the primitive imperial machine of oppression and brainwashing. A mass product that acts as a commodity in the sales market is a closed system with a limited characteristic. Unsurprisingly, some people dislike this method of consumption.

A non-mass product is an open system. Within this system, the possibilities of changing some characteristics to others are almost unlimited. This type of product is more attractive, but it is harder to produce. The principle itself applies to both the material and non-material world of production. After all, production is a fundamental principle of human existence. Making a spaceship or gossiping about neighbors is essentially the same process. To become a mass product, it goes through a stage of commodification. Such products do not have any significant characteristics for mass production. There are still some that are crucial from the producer or consumer's perspective. The apocryphal books are one example of this. The church recognized them as non-canonical and did not include them in the most common versions of the Bible.

The ideology that has gone through the comradeship is already a closed system; it may have mutually exclusive statements to achieve a strong result. The very purpose of its use does not change, and it works oppositely with the political views. The open system allows performing a political struggle of different ideas and principles. If there is no political debate, a mass ideology begins to take shape and becomes absolute for all.

Attempts to analyze contemporary Russian realities, with the cultural-civilizational approach, show that progressive humanity is still trying to find a way to explain what has been happening in Eastern Europe in recent decades. If this approach is proven, it would be possible to predict future events at least for this region. The way Russia views current global politics and geopolitical challenges demonstrate that the civilizational approach as a theory is unable to grasp what is taking place.

This is due to two primary reasons. First, Putin is currently offering the world community a hybrid approach to war and new principles of interfering in world politics based on it. Modern conflicts are not between hereditary monarchies, peoples, or ideologies. The hybrid method involves waging a kinetic and propaganda war for one's own power and enrichment. For this, the Kremlin used all possible old mechanisms and modern technologies.

In this way, the only effective way to fight is through financial sanctions against Putin's oligarchs and direct hostilities against the aggressor's army. The only goal of the hybrid war between Putin and his supporters is to preserve personal power by any means and at any cost.

Second, contrary to what the creators of the civilizational and cultural approach believed, modern civilizations are not necessarily monolithic. Globalization and current financial and economic flows have changed the world. Constant labor migration in search of a better life, and the consequences of the Covid-19 pandemic, significantly add momentum to the development of global society. Traditionally, political systems try to survive only by appealing to the past. On the other hand, modern progressive states are not only trying to adapt to this, but they want to lead this movement. People around the world have more in common than one may think. Undoubtedly, everyone has different traditions—the modern Japanese village lives very well compared with the capital of the Czech Republic, the city of Prague. The basic tenets of human civilization, including the fact that everyone uses money, everyone lives in centralized communities, and has children, are virtually universally accepted. Despite the distinctions across racial groups, civilizations, nations, peoples, and countries, all these and several more universal characteristics enable humans to coexist on the planet. Cities and villages located in different parts of the same country may differ more compared with the neighboring country these cities and settlements still make it on land.

The conclusion is that today's global connections of the whole humankind, and almost the same way of existence, make the general community more reinforcing than the existing divergences and differences artificially created between civilizations.

The only effective way for the Kremlin to pursue international politics is through war and threats to other countries while intimidating the opposition and brainwashing its citizens inside Russia. The actual goal of such activities is to retain power and material wealth gained through corruption and outright robbery of one's people. Do not expect liberal gestures from such a country.

Future events always have their roots in the past or the present. Being a participant in today's events makes it challenging for us to distinguish between the primary reasons for future events and their indirect causes. In the early 1990s, a military conflict between Russia and Ukraine seemed likely, but there were no fundamental civilizational or cultural reasons for it. In 2014, everything changed, and the Russian unprovoked and unfounded invasion only confirmed this idea.

Finding the history of the causes is always simpler after the occurrence than before. When it comes to the future, consequences work the opposite. Researchers cannot predict at this time which measures taken by Russia, the West, the United States, or China will have a disastrous impact on not only Ukraine but the entire world. The "New World Order" is already here. Humans haven't yet witnessed it! Or it doesn't appear as people had imagined. The Kremlin cannot comprehend this because of the Russian mentality prevalent in earlier eras.