Pistol: what is the Disney +/Hulu mini-series worth? 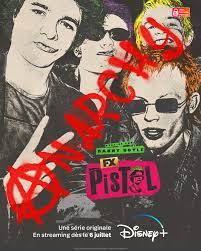 ‘Pistol’ mini-series was directed by Danny Boyle and tells the story of the Sex Pistols from start to finish. It centres around Steve Jones, their guitarist, whose biography Lonely Boy: Tales from a Sex Pistol lent its content to the adaptation. We see a Steve Jones that is functionally illiterate, ill-bred by parents, and lost in the system of a UK ravaged by economic recession. Like many other young adults, he is heavily inspired by David Bowie and wants to form a band. From there, we meet those that will each in their own time participate in what becomes the Sex Pistols: Paul Cook, Glen Matlock, Johnny Rotten, and Sid Vicious.

Filled with archive images and recreations of concerts and interviews, the series portrays what it was to be punk in the late 1970s. What we gathered was mostly this: it has never been about music. The Sex Pistols were meant to be merely a vehicle through which Malcolm McLaren - their manager - could spread political ideas aiming to change the system. Helped with his then partner and fashion designer Vivienne Westwood, they wished to establish punk as a way of life. Throughout the series, the Sex Pistols are constantly surrounded by the Bromley Contingent, their personal crowd of punk fans and future superstars themselves (Siouxsie Sioux and Billy Idol for example), wearing Vivienne Westwood’s creations.

However, many commentators on Letterboxd have pointed out the irony of releasing a documentary about the early days of punk rock on Disney +, something that John Lydon, Sex Pistols’s former lead singer, eagerly remarked as well. Surprisingly, he had no part in the making of the series and did not even consent to it, despite his character - played by Anson Boon - having a central part of the show. Lydon further called the piece a “middle-class fantasy” drawing attention to the often caricatural elements of the series.

Characters too clean and polished such as Louis Partridge who plays Sid Vicious are jarring when compared with the original people. Even towards the end of the series, when his character is defaced by drugs and alcohol, Partridge maintains a charismatic and, in the writer’s opinion, too angelic face to portray Vicious believably.

However, the show does have remarkable performances. Thomas Sangster and Anson Boon completely stole the show in every scene they were in. Danny Boyle made the choice to highlight how young the Sex Pistols were when they rose to fame. In this sense, the series touched lightly upon some sensitive details of the members’ personal histories, such as how Sid Vicious’s mother introduced him to hard drugs at a very young age. But, like other cinematic adaptations, a large chunk of the story was dedicated to Vicious’s destructive relationship with punk groupie Nancy Spungen.

In the end, is the series worth a watch?

It is an enjoyable and relatively quick watch, with a great soundtrack and performances. However, it is a little moralist at times and not that original of a premise. Documentaries and series about disenfranchised youths in England have been seen before, just like the Sid and Nancy story (such as in the 1986 film Sid and Nancy and 2009 documentary Who Killed Nancy?). Danny Boyle also chose to allocate an important place to the “will they won’t they” relationship between Steve Jones and Chrissie Hynde (the future singer of 80s band The Pretenders), despite their connection being amped up for dramatic purposes, and not at all central to the Sex Pistols story. Ultimately though, it enables younger generations to discover more about the punk spirit, Vivienne Westwood's early days as a designer, and even Chrissie Hynde’s The Pretenders.