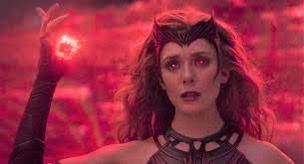 With the positive feedback that Marvel studios received after WandaVision and Doctor Strange in the Multiverse of Madness, one would think that they would take advantage of the rising popularity of one Scarlet Witch and Elizabeth Olsen. She was the star and focus of both projects. The fanbase has expressed a desire to either see her in more projects or a solo film.

The speculation was that at this year's D23, the film studio would announce a Wanda/Scarlet Witch-led project. Especially after Disney Plus’ Instagram post on August 9th, in which they showed the audience the Scarlet Witch’s crown/headpiece before the word “surprise”.

Despite all the rumors, the show Agatha: Coven of Chaos is right around the corner and slated to debut on Disney Plus in 2023. Agatha was the antagonist of WandaVision and dealt with Wanda directly. So many also would have liked and expected some news on this as well.

To many, the Scarlet Witch should be rewarded for her success. And there was no update on this character or any character related to her.

One Scarlet Witch fan tweeted, "NOTHING HAS BEEN SAID ABOUT SCARLET WITCH NOR COVEN OF CHAOS ON D23, I AM GOING TO KILL EVERYONE YALL, MY VILLAIN ERA HAS BEGUN."

There have been many reactions like this one. Many of her fans are left disappointed. They want more from the anti-hero that was introduced to them in 2014.

It was rumored that Elizabeth Olsen was at D23, but she never made an appearance at the show. In an interview with GMA, regarded to her making an appearance in the Coven of Chaos series or a possible spin-off Olsen said, “I would love to be a part of both of those. No one tells me anything, and I'm not even hiding a secret because I'm bad at that. I know nothing about my future.”

Jodie Comer is Kind of a Big Deal in this Industry

‘Spider-Man: Across the Spider-Verse’ New Trailer Showcases A Multiverse Full Of Surprises