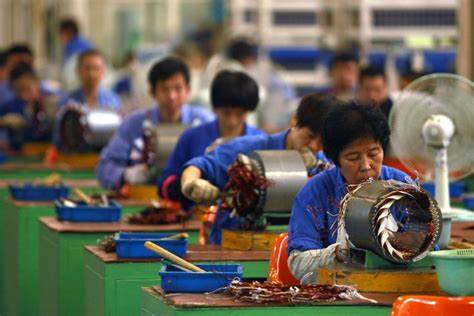 Thirty-four years ago a group of multinational institutions established the IPCC scientific body to provide the most up-to-date scientific information and evidence for policy-makers to adapt and mitigate climate change within so-called Assessment Reports. So far six reports have been published, with the fifth publication, released in 2014, being the most widely referenced by its advancements in developing links with current socio-economic trends.

Written within the contexts of accelerating global CO2 emissions from trade, labour and growing worldwide manufacturing under globalisation, the fifth report noted that a ‘growing share' of global greenhouse gas emissions were being released from ‘manufactured’ products ‘traded across international borders’.

This raised central discussions for drawing the link between labour, land and emissions with which China was placed as the central piece of case evaluation.

China in the early 2000s was labelled the ‘Workshop of the World’ because of its varied provinces filled with vast factories manufacturing goods for international export. The nation’s huge population size and controversial evidence of smuggling illegal workers set the trajectory for both unruly labour conditions and huge emissions. In fact, the proportion of global emissions from Chinese land and labour has been growing and now reaches sums more than the next three largest emitters - US, EU and India – combined.

The iconic ‘Made in China’ branding on varied consumer goods is, in essence, a highly contested phrasing yet certainly signifies harsh labour conditions and mass emissions of greenhouse gases. As China’s economy has grown and continues to grow, both labourers and the world suffer.

In 2021, near 290 million Chinese workers were migrants and the nation emitted near 12billion metric tonnes or 33% of the global CO2 emissions. For comparison, 2020 had 5 million fewer migrant workers and 10.7billion metric tonnes of CO2 emissions which, despite suppressions from the pandemic, was a 1.7% increase from 2019. Working conditions for migrant workers are well-documented as harsh, with employers violating worker rights, weak or absent safety nets, and severe charges for any resistance to working conditions and incomes.

In this instance, the slogan ‘blood, sweat, and tears’ is well-attuned to how China has been able to build its economic prosperity and it is both the labour and the world who are facing its repercussions. Perhaps it is better re-phrased as 'blood, sweat, tears and CO2'.

The discourse for China has shifted over recent years from a ‘workshop’ to the ‘chimney’ of the world as a recognition of the nation’s developments aligning with the so-called ‘fossil capital hypothesis’, a notion highlighting the intimate links between poor labour regulations and higher greenhouse gas emissions.

China has been the ‘ghostwriter' for the IPCC’s report, and it will continue to be the protagonist of the contemporary climate crisis. How this century’s storyline will follow and end will undoubtedly be determined by how the nation will revoke its current ‘chimney’ status and counteract the fossil capital hypothesis.

'the Workshop of the World': What 'Made in China' Really Means (businessinsider.com),

China’s Carbon Dioxide Emissions Are More Than Twice Those of the U.S. - IER (instituteforenergyresearch.org),

Global CO2 emissions rebounded to their highest level in history in 2021 - News - IEA,

5 Facts About Workers' Rights in China - The Borgen Project

China as Chimney of the World: The Fossil Capital Hypothesis | Request PDF (researchgate.net)