ICC in Ukraine: What this means 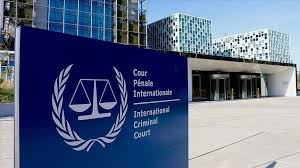 The situation in Ukraine changes daily with an overwhelming amount of information and developments circulating the media. In the last week, a series of sanctions have been imposed on Russia, while the international community continues to condemn the actions of Vladimir Putin. Most of the international community has come together to stand against Russia, causing speculations for the start of a world war.

Specifically, in the past week, we have seen evidence of disapproval over what has been described as ‘’Russia’s war of choice’’. The protest of over 100 diplomats and ambassadors from around the world by walking out of the 49th session of the UN Human Rights Council was a response to the pre-recorded video message of the Russian Foreign Minister after refusing to attend the session. Anthony Blinken has challenged Russia’s membership in the Human Rights council by questioning whether a United Nations member state which invades another country and therefore commits further human rights abuses should in fact remain in the council.

It is important to remind Russia’s position on the United Nations Security Council as one of the permanent five (P5) members. In the past week, once again, we have seen one of the P5 members violating their primary responsibility as a member of the council to maintain international peace and security. Once again, we see a major power causing a serious crisis and conflict by choice, which defeats the purpose of peacekeeping and adds to the long-term suffering of people all around the world.

Amongst the many developments in the past week, the International Criminal Court (ICC) released a statement explaining the launching of an investigation in Ukraine. The role of the ICC is to step in when states are unable or unwilling to bring perpetrators to justice. The court only deals with specific cases as it has jurisdiction over war crimes, crimes of aggression, crimes against humanity and genocide as per Article 5 of the Rome Statute.

Ukraine remains a nation state that has signed but not yet ratified the Rome Statute, so the state is not a member of the court. However, the ‘’when necessary or needed’’ declarations, also referred to as ‘’ad hoc’’ article declarations under Article 12(3) of the Rome Statute, grant jurisdiction of the ICC over the state of Ukraine. This means that the court can request authorization to start an investigation.

The examination of alleged crimes against humanity and war crimes committed on the territory of Ukraine has been an ongoing case since 2014. Today, the court has been petitioned to start an investigation into the situation in Ukraine with a reasonable basis that crimes which fall under the jurisdiction of the ICC have been committed and are being committed today. The case considers crimes any party of the war has committed since 2013 on the territory of Ukraine, which clarifies that the history of Ukraine and its relations with Russia are not being disregarded.

The significantly swift response of the ICC to the situation in Ukraine remains unexpected, considering the previously lengthy processes of the ICC’s operations. Once the jurisdiction of the court is triggered, however, the next steps can take years to carry out. The legal process of the court initially requires the preliminary examinations to be carried out for the investigations to follow. The pre-trial, trial and appeals stage continue to then lead to the enforcement of sentence. Each of these steps depends on the help from the state being investigated as well as any other state parties involved, especially because of absence of a court enforcement body.

With Ukraine, even though the court includes previous evidence from the 2014 examination, the new investigation is expected to be prolonged. Nevertheless, it is important to acknowledge the extreme pressure that the court has received which according to ICC prosecutor Karim A. A. Khan QC includes 39 ICC member states referring the case to the court in order to trigger an investigation into the current situation. While the initiation of an investigation still depends on the authorization from the Pre-trial division, the court aims to operate according to the principle of complementarity and not replace the national criminal system.

Acknowledging the challenges that the court might face regarding the cooperation of the involved parties in the war also contributes to the reality of how lengthy the investigation is expected to be. The provision of critical and essential evidence in relation to the conflict between 2014 and today will probably require the support of state parties around the world and have called for the help of the international community. In the recent statement of the ICC, prosecutor Khan QC has also reminded those involved that no individual has a license to commit crimes which fall under the jurisdiction of the court.

While investigating the mentioned crimes, bringing the countries accountable to justice and preventing further human rights violations remains the primary goal, the criticisms of the ICC continue to dominate discussions. The court maintains a reputation for its time-consuming and costly investigations. People around the world have argued against the extortionate amount of money being used by the court, which comes to almost 150 million euros annually. Examples of previous cases such as Afghanistan, Libya and others have been recalled to remind of the limited convictions (total of 10 convictions) the court has achieved compared to the number of cases that have been brought before the court.

Finally, what has been described as ‘’ineffective’’ outcomes of previous investigations by the ICC remain a reason to undermine the consequences for those responsible for the crimes committed. Overall, the decision to start an investigation into Ukraine has been met with several negative views of people around the world and seems to already be doomed.

The Use Of Justice Over Russia-ukuraine War