“Voice of Hind” or Verbal diarrhoea of ISIS 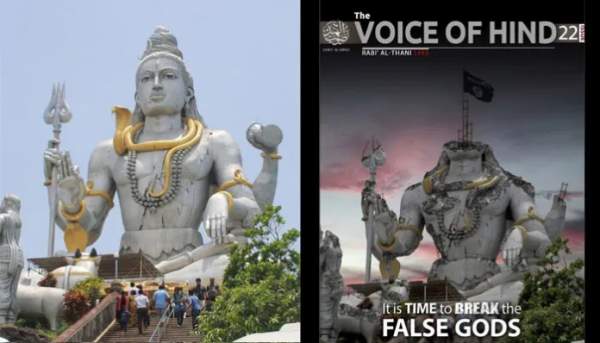 The imperious cover of the magazine

The latest cover of the ISIS-backed propaganda magazine was released on Saturday, days after NIA's crackdown on Kashmir Valley. The cover page has a computer-generated broken idol of Lord Shiva with an ISIS flag hoisted in place of the head. Under this, the proclamation reads, " it's time to break false Gods." The idol is similar to the Murudeshawara temple idol of Lord Shiva and is causing a stir among netizens. It was noticed by Kumata (Karnataka) MLA Dinakar Keshav Shetty from BJP. He posted this image on his Facebook account and encouraged the government to take action against such media. In his words, "It has come to my notice through social media that a magazine voice of hind of the terrorist organization ISIS has announced to destroy the Shiva statue of Murudeshawara temple. The protection and development of Hindu temples are among the main principles of our party. Our defence department is strong and empowered to act against such threats. The information has already been forwarded to the Home Minister through phone and additional security will be provided at the Murudeshawara Temple soon." The NIA (National Investigation Agency) raids in Anantnag mentioned "Voice of Hind," and its content creators are being sought. It was circulated through Telegram channels carrying anti-India propaganda, and all participants of such groups are also being monitored. The editors claim that their readers are spread all over India. There are also claims that ordinary Muslims are being probed and imprisoned to learn more about this publication.

The magazine was being compiled in Karachi and Islamabad (Pakistan) by young graduates and translators. Voice of Hind promotes ISKP (Islamic State Khorasan Province) terrorists, like Huzaifa-al-Bakistani. In South Kashmir, an Indian technology team working with an unknown foreign investigating agency discovered its content-producing relationship. Although the content handlers were residing in India and Afghanistan, the design was made in Pakistan. Articles were gathered from India and Afghanistan. Bangladesh and the Maldives have plans to distribute this issue widely. NIA arrested Umar Nisar, Tanveer Ahmad Bhat, and Rameez Ahmad Lone, residents of Anantapur, for creating objectionable material and distributing it among the youth. NIA also recovered a diary containing statements about "drawing swords for jihad" and ISIS logo-bearing clothes. These things indicate the possibility of the three accused planning propaganda dissemination. The magazine had already discussed attacking Indian security personnel and avenging the Delhi Riots in prior editions. There were also articles on how to target cover restrictions as a weak point in India. This edition has a story titled-"We are coming" alongside a disturbing vision of the shootout of a street vendor. It speaks in detail about the demolition of Babri Masjid and the subsequent Ayodhya ruling. Salman Khurshid's book about the topic is already facing backlash for comparing Hindu rightist organizations to ISIS.

The founder from the city of Nizams

Abdullah Basith, aka Khattab Bhai, founded the Voice of Hind to incite Muslims against non-Muslims to foment anarchy. This publication attempted to persuade Muslim youth to join ISIS or operate as ISIS agents in high-ranking positions in the Indian government. From inside Delhi's Tihar Jail, he allegedly assisted in the compilation of this edition as well. Basith got arrested in 2018 as a suspect of the 2016 Abu Dhabi module. Days before his arrest, he had bought two AK-47 assault rifles and was hatching a scheme to assassinate an RSS leader of Maharashtra. He had tried to flee the country twice from Srinagar and West Bengal in 2014 and 2015 but got caught by Special Investigation Teams. He has been involved in extremist conduct since his undergraduate years. He also assisted ISKP operatives Jahanzaib Sami and Hina Bashir Beigh, a Kashmiri couple. Huzaifa-al-Bakistani, a Pakistani national who was a key ISIS recruiter and mastermind of the terrorist organization's activities in Jammu and Kashmir, influenced him greatly. In the previous edition, the centre was coronavirus and had printed that "spread coronavirus to as many Kafirs as possible to take them down easily and with less effort." It also had suggestions to keep scissors and hammers at hand to kill non-Muslims. ISIS backs several such magazines like Dabiq and Rumiyah. The aim of such magazines, especially in a multi-religious country like India, is to incite communal violence. They also provoked some gullible Muslims to participate in Anti-CAA rallies and cause destruction in public buildings.

Currently, the magazine is not available in public domains and is accessible only at jihadology.net for select researchers. Terrorist organizations like ISIS have begun exploiting digital spaces for polarising youth. They are trying to radicalize minorities over some supposed injustice and marginalize them exacerbating religious harmony in India. It should be addressed at the earliest to mitigate such a situation by realistic security solutions.