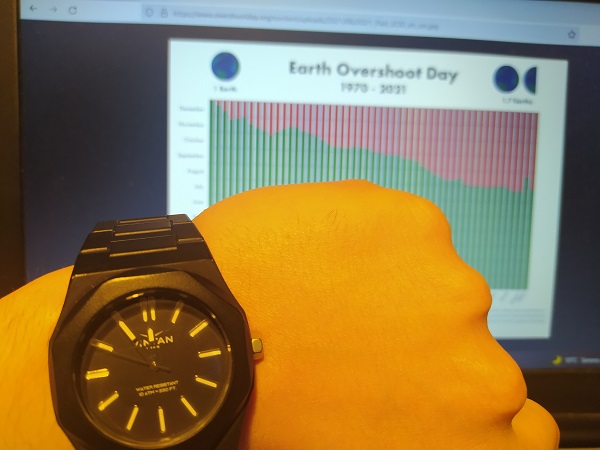 Climate change is an issue we have become increasingly aware over. In these last few years, it has also become more and more of a prominent topic for us to discuss: while there are still a few people dismissing it all as a ruse and a falsehood, the majority of the scientific community (as well as of humankind at large) is concluding that something is happening. Climate change, as well as the cascade of consequences it entails, will become a problem sooner rather than later.

How exactly this process works is somewhat complex to discuss: the bare bones of it is that following the industrial revolution humankind has become responsible for an ever-increasing number of events that progressively threw off the balance regulating how planet Earth managed its atmosphere and replenished its resources. Whatever incredible interplay system there is in place, human activity is (for lack of a better formula) stressing it to its breaking point; while there have been climate changes before our unknowing intervention, such as ice ages or periods of great tectonic activity and turmoil, we have managed to mess up the system quite deeply and comprehensibly.

One of the most interesting ways we have to grasp how great of an influence humankind is having on the planet’s resources is the so-called “overshoot day”. In the most general terms possible, planet Earth can replenish its resource pool year by year (using trees growing, plants giving fruit, animals reproducing, and so on): as long as the consumption of resources is kept within the limits of what the planet can replenish, things are pretty much as smooth as they can be. The problem begins to arise when there is a surplus of resources exiting the system and not being replenished. Overshoot days mark that very moment: each year, consumption of resources exceeds the system’s capacity for restoration, and (as a general trend) overshoot day comes sooner each year than the previous. As an example, overshoot day in 2022 for Italy would be May, 15th: by that date, Italy used all of the resources at its disposal for the whole year. And yet, there is still more than half a year to slog through.

The consequences of a concept such as overshoot day are quite transparent: if we can’t finish even a whole year without consuming resources meant for the next cycle, year by year the environment grows progressively poorer and there is the buildup of a resource deficit that will (sooner rather than later) bring about disastrous consequences. By maintaining the current trend and the current living standard, humankind is accumulating a debt of resources each year that someone in the future will have to pay for. Of course, this is not to say that every human on the planet is contributing equally to overshoot days: there are differences. Europe, the USA, and (in broader terms) those states that make use of industry account for greater percentages of resources being burned than others. How to tackle such a state of things is one of the challenges that await us in a future that grows increasingly nearer.

How to solve the issue, then? We have an unbalanced equation between what Earth as a system can produce each year and how much of such resources we do consume in the same amount of time. One quite handy solution to the problem would be to simply increase the number of resources available, but that would be tricky, to put it mildly: the main problem with this approach is that even now we would need the resources of around about a couple of Earth-size planets (and three just to be sure and content) to simply balance the equation. That means needing to find at least one other planet (assuming it even exists somewhere in the universe, which is not a given) and better yet find two. This state of things renders the problem impossible to resolve from this angle.

Of course, no nation consumes the same mass of resources over the same period of time as any other: what every nation shares are a resource pool that is growing progressively smaller and scarcer year by year. Keeping the current rate, there may come a point when humankind is forced to make difficult choices, and (as a consequence) conflicts may spark. The idea of a resource war of sorts in itself is a concept that has fascinated humankind for some time now, and that has been greatly explored in fiction with honorable mentions being movies such as “Mad Max – Fury Road” (Warner Bros., 2015) by George Miller (March, 3rd, 1945 - ), or the prologue of famous videogame sagas such as “Fallout” (published by Bethesda Softworks).The narrative premise of such works is that the scarcity of resources (and the unwillingness of nations to come to a compromise of any sort) was the cause of an all-out war that has engulfed the planet in nuclear fire and almost caused the extinction of humankind.

What would become of humankind should a resource war begin is unclear, and likely better be left unexplored: both “Mad Max - Fury Road” and the “Fallout” series offer answers which are less than ideal, with dysfunctional societies rebuilt around charismatic leaders or bellicose ideologies. Gangs of raiders, slavers, warmongers, and the like are common in every instance of the “Fallout” series, ready to jump at the throat of peaceful inhabitants of the wasteland for their nefarious ends. On the other hand, “Mad Max - Fury Road” presents us with the warlord Immortan Joe: an old military leader from before the collapse of society who is simply obsessed with the female protagonists and their potential of giving him a male heir to its so-called “citadel”: a water storage facility now standing amongst the ruins of the old world.

Where does this picture leave us, then? We stand at the precipice of change, be it for good or ill: we still have the chance to change the course of history, but the prospect will likely be a long and arduous task. And yet, despite how dire the situation may be now, its consequences may prove far more catastrophic for humankind: what we can do is try to explore different paths, and balance our collective needs against the chances we are giving the planet to sustain our numbers and try to work to lower the deficit year by year and day by day. Or we could simply enjoy the time we have left, waiting for what we have chosen to be the inevitable end of the line.