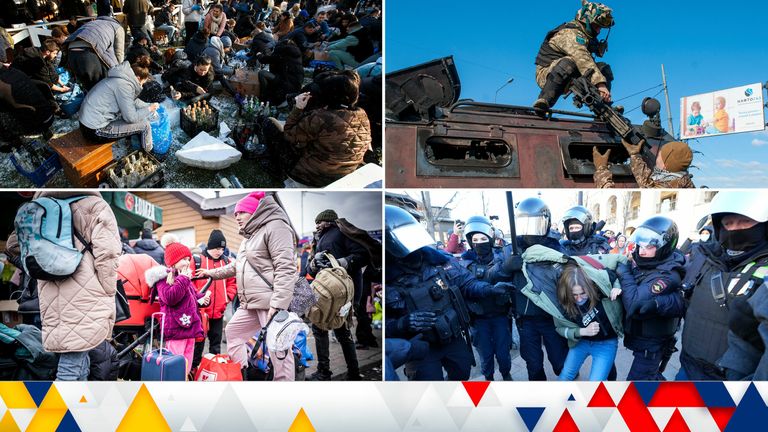 Russia's military invasion of Ukraine under the pretext of purging the Ukrainian government of "Nazis" failed. The Kremlin deliberately delays the moment of its defeat. The Russian army has been deliberately shelling peaceful homes, hospitals, and schools all this time.

Direct military aggression failed. Ukrainians as an army and as a nation turned out to be stronger, more organized, and angrier than Russia expected. Therefore, the second phase of the "rescue operation" of the Kremlin is a hybrid intervention in the information space. Victims of such influence today are not only Ukrainians but also many Western media. The Russian government has returned to its favorite activity - manipulation and destruction. This is what they really do. Unfortunately, this is a fact that needs to be acknowledged...

The Kremlin is re-launching old, tried-and-true narratives. It is easy to activate a narrative, that was spread once. Russia is a state that always has imperial goals. Historically, this has been the case. Regardless of the time period in history, the Kremlin's imperial goals are all relevant. The use of old Soviet paradigms of thinking and new narratives against the backdrop of a current military catastrophe is the only way the Kremlin sees the hope of avoiding defeat in the war.

All the information that Russia is broadcasting now is an attempt to divert the views of its citizens and the whole world from direct military operations and crimes of the Russian army to a different plane. This is an attempt to seize the initiative in the information war, which Russia is already losing. Hence the desire to show that the people in the Russian Federation also suffer from the war, etc.

At the same time, all the bombardments do not stop. In the temporarily occupied territories of Ukraine, the Russian military is committing terrible crimes. Therefore, the Kremlin is deliberately trying to distract the whole world from this not just by peace talks (where absolutely unrealistic demands are in forwarding) but by the revival of old narratives in the post-Soviet space.

Russian propaganda creates the absurdity and destructiveness of statements on aim. They are directing efforts to resolve the conflict in the wrong direction. Their refutation only delays the process. An alternative interpretation of the facts of the Russian invasion of Ukraine leads to confusion among the population. In an atmosphere of nervousness, stress, and misunderstanding of the whole picture, Russian propaganda presents an incredible set of lies and old narratives instead of real war crimes.

The Kremlin tries to hide the facts from the rest of the world or use the maneuvering policy, at least. They change their point of view every time circumstances change. Here we need to mean defending their "special" point of view, whatever it may be. The situation creates even more contradictions with the other side of the conflict. Within Russia, this situation only plays into the hands of the authorities. Here, as always, the narrative of the "bad West, which has a pernicious influence on Russian youth, " is popular. Thus, the authorities appeal to people of higher age categories. They turn out to be carriers of the "only true" idea of ​​the modern world and the role of the anti-Western paradigm of Russia in the world. Hence, Russians are delighted with the Kremlin's allies like Cuba, Venezuela, Iran, Belarus, etc.

All means of the government media work only for the goal is to cause an alternative "image" of the world, agreeable for the Russians and their supporters solely. Russian "green" screens and other sources of information direct their efforts exclusively to persuade their users that the reality they broadcast is actual.

Russian propaganda displaces facts and events from "the real-time" and substitutes them with the invented, ideologically correct interpretation of the events. Such an "event" becomes the essence of the "news". It does not correlate with a specific place and fact of the action. At the same time, the residents massively oppose the invaders and their activities. But the media is not interested in highlighting that.

Here the main principle is the following: first comes the statement of the government and then the "news" that proves "this statement." Lots of attention goes to the time itself. They deliberately break cause-and-effect relationships. Here, an old idea learned through the appraisal of the events within the classic totalitarian systems, such as the Third Reich or the Soviet Union, does not work anymore. The party ideology and its execution lead to certain events highlighted in the media from the point of view corresponding to the ideals.

"Time" erases as useless from modern Russian propaganda. Now things have different order: Putin said something, and the media confirmed it, and nobody knows if it happened in real life at all. Russian propaganda remains mysterious and beyond understanding for many Ukraine and EU residents. We still struggle to understand how it is possible that Russians believe in those things. They believe in everything without even verifying. The ones who can "check" if the facts are real either work for the government or do not have a right to express their thoughts. The propagandists and their "experts" have exclusive access to the only source of information. For the rest, there is "No entry!" In the context of the media total control field and the ban on almost all Western social networks, hearsays and conversations with acquaintances again became the only sources of alternative information.