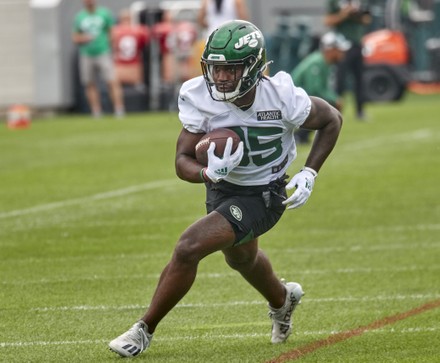 Ahead of this Friday's first preseason game, the New York Jets take on the Philadelphia Eagles. Fans will have the opportunity to see Zach Wilson hopefully show flashes of improvement for the brief time he plays on Friday night. It will also be a good opportunity for players such as running back Zonovan Knight who has had a strong training camp and was able to catch the coach's attention with his breakaway speed. There was a report of Knight breaking away for a 65-yard touchdown to end the practice last Friday. A good confidence booster to end the day.

Knight, who spent 3 years at NC State University accumulated 419 carries, 2286 yards, and 18 touchdowns. He shows that he has durability and break-away speed in a system with offensive coordinator Mike Lafleur, where Knight may have the opportunity to thrive. He is one of the more underrated players on this Jets team and may shock people by making the 53-man roster.

He is most definitely an underdog to make the final roster, as the Jets running back room is heavily packed with a lot of talent. The number three position is mainly between Ty Johnson and Tevin Coleman, who were both main contributors to the offense last season. Ty Johnson had been the minimal version of a power running back for the Jets offense, up until the addition of Breece Hall in this year's draft. Hall now allows the Jets to convert in goal line situations and will bump Johnson down to the possible number 3 running back position. It won't be easy, but Knight is someone to look out for in game one of the preseason and to plead his case to be a part of this Jets 53-man roster.