A Homage For The Indigenous; Securing The Rights Of The Guana Yala Peoples 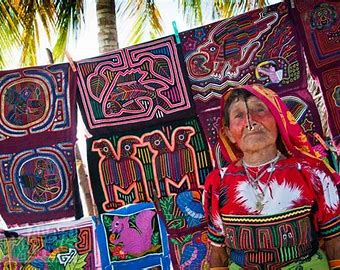 Indigenous peoples represent 5% of the world's population yet secure over 80% of global biodiversity. Often, indigenous territories are located in remote and protected regions of the world under various titles like ‘autonomous’ or ‘aboriginal’ regions in Euro-Asia and Canada, ‘tribal areas’ or ‘belts’ in India and Pakistan, ‘communal reserves’ in Latin America, and ‘homelands’ in Hawaii.

Such peoples, despite their protection, are increasingly vulnerable to the ill effects of modernisation – climate change, social inequality, discrimination, and resource scarcities especially land. Reconciling such issues is regarded as a ‘right' and, only by securing the importance of such rights, a traditional native livelihood can thrive with the environment. Exercising indigenous rights has a central role in strengthening social resistance against modern activities of extractivism and exploitation, with the legal geographies of land and treaties proving as major barriers impeding it.

Indigenous rights are one of the few entitlements which have had a profound role in slowing the pace of ecological collapse. By harnessing a deep intrinsic relationship with the environment, indigenous peoples can support their unique identities, cultures, and spiritual well-being. The land and natural resources withheld within their distinct territories are inextricably linked to their livelihoods and without it, their expression of indignity hence survival would be ill-fated.

In reflection of this, the recent wave of indigenous ‘refugees' from the 365 islands of Guna Yala, Panama, is an absolute violation of both their rights and the environment. Rising sea levels have forced locals, the first indigenous communities in Latin America in fact, to relocate from their lands – with their territories expected to be inundated completely by 2050. Magdalena Martinez and many other islanders have been forced to move from their homeland into the mainland – two places of huge lifestyle contradistinction. Peru state authorities have helped with the relocation by constructing 300 new households, yet homes for an additional 30,000 are still needed.

Relocating the locals will inevitably require huge lifestyle shifts in their working and living conditions, diet and hobbies, culture and traditions, and so on. Unfortunately, displacement is a future inevitability for many indigenous around the world as if the heinous records of colonial oppression haven’t done enough already.

Climate change is threatening the security of indigenous livelihoods and the legal power they possess for safeguarding the environment by counteracting incentives of extraction and exploitation. Upholding indigenous rights is one of the most powerful barriers protecting all of us from a future of climate catastrophe. But still, the remaining 95%, or more narrowly 17% who live in the world’s current developed countries, underappreciate the tremendous gift of native peoples which can teach us how to act and behave like global stewards.

Indigenous peoples are our last line of defence against climate change, but it is we, the non-natives, who have to become the treaty upholding their rights of a traditional way of life and their partners by committing efforts to protect their native livelihoods for the sake of ecological sacrosanctity.