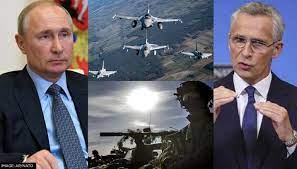 This drill's name is Steadfast Noon - the opposite of midnight, usually associated with the nuclear disaster. The practice is highly classified, with details restricted to the army personnel involved; indeed, it also does not appear on the public exercise and activities list of NATO.

What do we know about Steadfast Noon?

Currently, the drill is an annual base routine and will last until October 30th. The activities are part of the nuclear deterrence program of NATO and involve personnel and armaments specialized to respond to a nuclear threat.

The objective of the drill is to prepare army personnel to respond in case of a nuclear strike scenario. They will be braced for defense against an attack, how to counter its effects, and what these effects are. The reclamation of the affected areas is also part of the program, alongside attacking and counter maneuvers for the ones detaining nuclear armaments. Indeed, only the nuclear-armed members train for the attack operation during the drill.

Which are the nuclear-armed members of NATO?

Firstly, it must be assumed that NATO itself does not possess any nuclear weapons, as the weapons remain in the possession of NATO nuclear members, the US, the UK, and France.

NATO's nuclear deterrence program has the "sharing principle", through which the members without nuclear arsenal are provided with nuclear weapons by states which do hold them. Even if located under other states' surveillance, the weapons remain under the owner states’ control for the duration of their use. These weapons stem from a Cold War-era agreement in the 1960s for the Soviet Union deterrence. The nations involved are Belgium, Germany, Italy, Holland, and Turkey, which host American nuclear bombs in the bases located on their territory.

What will happen during Steadfast Noon?

An official program is not available as the drill is highly classified. According to what has emerged so far and based on the previous edition of the drill, fourteen nations will be involved.

The training will engage the army personnel alongside conventional jets, surveillance and refueling aircraft, and nuclear-capable aircraft, the US B-52 long-range bombers, without live bombs. The chosen area is Belgium, which is hosting the exercise alongside training flights also happening over the North Sea and the United Kingdom.

What can we expect after the drill?

The world fears what Russia will do in response to NATO’s training, with the concern of it as a deliberate provocation. Asked about the possible repercussions, Stoltenberg said “it would send a very wrong signal now if we suddenly canceled a routine" and added, "Russia knows that a nuclear war cannot be won and must never be fought".