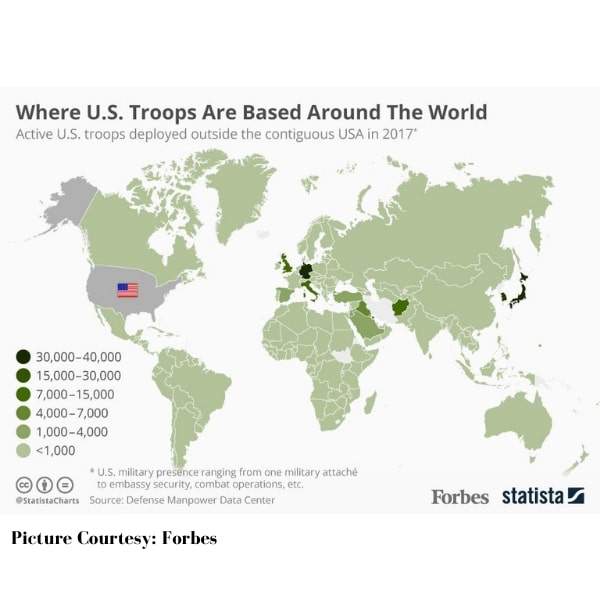 The United States completed its military withdrawal from Afghanistan recently, bringing an end to the 20-year war in the region. The US administration is claiming that the withdrawal was a success whereas, most experts have deemed it a colossal loss for the US military, drawing parallels to the fall of Saigon in 1975.

The US has a long and messy history of military interventions worldwide, nudging American leaders to spend more and more on defence. According to a press release published by the White House, the Biden-Harris administration on May 28, 2021, presented President's Fiscal Year (FY) 2022 budget before Congress, requesting $752.9 billion for national defence, of which about $715 billion are supposed to go to the Department of Defence (DOD).

America by far has the largest troop presence outside its borders. The global US military deployment data suggests that America had deployed a total of 173,000 troops in 159 countries by 2020. The US has around 800 military bases throughout the world, which is a massive number compared to other countries like Russia with nine bases and  UK-France with thirteen bases. Their other allies like Japan, Australia, India, and Israel, have only one base outside their borders. These US bases range from massive military compounds to small airstrips.

The cold war made the presence of American troops around the world imperative to US strategic goals. It played the catalyst for US expansion to every corner of the globe. Countries like Germany (54,000), Japan (50,000), and South Korea (28,000) have the largest US military presence. These countries saw an influx of American troops during the second world war and the cold war. Still, these troops have not headed back to their homeland.

Operational costs of these bases burden American taxpayers with 70 to 100 billion dollars per year. The American public has to pay approximately 10-40 thousand dollars more for a soldier stationed abroad compared to one stationed home. However, this cost seems to be worth it to most lawmakers. The idea that US military leadership provides indispensable stability to the globe is now a fixture of US strategy and foreign policy.

In the last 20 years since 9/11, the United States has led multilateral coalitions in three key conflicts in Afghanistan, Iraq, and against the Islamic State group in Syria; it also undertook defence and intelligence operations in numerous other countries.  Weighing advantages against expenses gives ambiguous findings. Although, what is evident is the constancy with which some of the most severe problems stem from unforced U.S. policy blunders and the unanticipated repercussions of well-intended efforts. America's global attempts to promote liberty and democratic administration have faltered. Since 2005, worldwide freedom has stagnated and worsened, and the enormous strains on America's democratic system have grown considerably.

The wars in Afghanistan and Iraq deposed totalitarian regimes and generated a qualified but tenuous feeling of freedom in nations, which remained exposed to various security concerns and problems. The costs of these conflicts were high for these nations, America, and other allied forces. However, one lasting benefit will be the younger generations of  Afghans and Iraqis born after these conflicts and raised in flawed but more liberal societies. This generation has demonstrated a willingness for positive change, as seen by the multiple waves of protests for rights in Iraq in the past few years. Their participation in an inclusive but flawed electoral system shows hints of optimistic behaviour. And, while recent events in Afghanistan have thrown a pall over these generational advances, Afghan youth—particularly women who have had access to education and leadership roles—will almost certainly make it much harder for the Taliban to reinstate an old system.

Mishaps and unforeseen errors have seriously harmed America's efforts to project itself as a role model of moral leadership for the rest of the world. These included notorious atrocities such as torture of detainees in conflict zones and around the globe; contentious drone strikes; and wide-ranging intelligence-gathering initiatives that used new technologies to collect information in a manner that raised concerns about democratic accountability of America's political system.

Furthermore, following decades of advances for freedom and liberty commencing in the late 1970s, the momentum began to turn in and around 2005. During the intervening years—roughly the last decade and a half—the globe has seen stagnation and deterioration in political rights and civil freedom around the world. The Middle East and regions in Southern Asia have witnessed massive attrition and system changes, including a wave of protests beginning with the 2011 Arab spring. Still, the fundamental graph for inalienable rights remains dismal, with nearly all nations graded as "Not Free" or "Partly Free" by Freedom House.

Extremist beliefs that existed two decades ago have developed, taken on new shapes, and expanded throughout the Middle East, Africa, and Asia. The global campaign against Salafi-jihadi terrorism is a mixed bag. In 2011, US special operations troops assassinated Al-Qaeda leader Osama bin Laden. Beyond bin Laden, the US has also been successful in assassinating important terrorist commanders. The United States' drone operation against al-Qaeda on the Afghan-Pakistan border looks to have been successful in severely reducing the core group's ability to carry out attacks. A US-led military operation also eroded the geographical hold of the Islamic State group in Iraq and Syria.

Though organizations such as the Islamic State have captured the world's attention in recent years, its Salafi-jihadi philosophy has spread globally, with groups sprouting in places as unexpected as Mozambique. Over the last twenty years, terror groups spurred by this doctrine have murdered thousands in Sub-Saharan Africa and the Asia-Pacific regions, notably the 2002 Bali bombing and the 26/11 Mumbai attacks, which caused hundreds of deaths.

The Taliban's takeover of Afghanistan following the United States' military withdrawal is likely to be a severe setback. In the future, the Taliban will most likely provide safe harbor to al-Qaida and other Salafi-jihadi terrorist organizations, and the US defence and intelligence community will have a tough time stopping terrorist strikes with a hostile regime in Kabul.

Measures aimed at assisting other nations in developing credible and competent governing authority, which were part of the post-9/11 initiatives in Afghanistan, Iraq, and other crucial nations, failed to generate any resounding success. The weakest link in post-9/11 efforts was assisting other countries in developing administrations that were functional and had comprehensive acceptability in the eyes of their people. This difficult task necessitated a thorough knowledge of internal power structures and deciding the best approach to assist other cultures in navigating significant divisions—an understanding that the United States and other outside players never completely grasped.

Millions worldwide are fleeing their respective homelands due to the permanence of radical ideology, violent conflict, and social unrest. Overall, the worldwide refugee and internally displaced persons (IDPs) rate has grown by almost 350% from 18 million (12 million refugees and 6 million IDPs) in 2000 to more than 69.2 million (20.6 million refugees and 48.5 million IDPs) in 2020. Climate change and conflicts unrelated to the difficulties of terrorist networks and post-9/11 wars have also contributed to the escalation of the situation. However, recently as seen in Afghanistan and conflicts in Syria, Libya, and Yemen, breakdown of governance and the prevalence of non - state actors frequently force people to migrate across borders.

Analysis:   Turkish Invasion Of Cyprus: The Conflict In The Mediterranean

America's political leaders have continually failed to explain how the nation's post-9/11 conflicts fit into its larger foreign policy objectives. While President George W. Bush inconsistently sought to characterize the Iraq war as part of his Middle East Freedom Agenda, his three successors emphasized the shortcomings of the United States' post-9/11 campaigns and overall involvement with the Middle East. Simultaneously, political groups attempted to turn these military conflicts into factional wedge issues, beginning with President Bush's push to invade Iraq during the 2002 midterm electoral cycle and continuing through the Benghazi consulate attack in 2012 and the fight against the Islamic State group from 2014 to 2017.

For the past seventy years, the United States of America has set up bases around the globe in response to threats, but they just never left. These 800 bases represent a massive system of military power that does not come under enough discussion. Despite decades of deliberation about "smart power" and "integrated power," the US has failed to find an effective means to synchronize and consolidate all aspects of national power. "Civilian surges" in Iraq and Afghanistan failed to provide the expected outcomes, and politicians largely depended on the military to carry out duties best handled by civilian institutions such as the United States Agency for International Development. Even while political leaders and policymakers openly said that diplomacy and other nonmilitary measures should serve as the primary way of engagement, they could not employ such instruments skillfully or in unison.

The United States must better tailor its economic and military aid to local circumstances. In Afghanistan, for example, the US developed an army in its character, reliant on air superiority and contractors who also left when the US military departed. The tactic has not worked for America in the past, neither in Iraq nor in Afghanistan. Quite often, rebuilding initiatives focused on accelerating the United States' disengagement rather than meeting local concerns, encouraging malfeasance, and providing suboptimal returns on investment. To achieve fruitful results, security and economic aid measures should tailor to local conditions and requirements.

Finally, ending American military engagement in wars demands more careful planning and deliberation. Military withdrawal does not, generally, cease U.s. intervention in wars. President Barack Obama disengaged from Iraq in 2011, only to re-enter the conflict when the Islamic State group resurfaced in 2014. Similarly, President Joe Biden withdrew US forces from Afghanistan but has vowed to keep an "over-the-horizon" counterterrorism campaign focused on the region. The Obama administration devised ambitious plans for American civilian involvement in Iraq following the evacuation, but to no avail due to non-enactment. Similarly, the Biden administration's commitment to persistent post-withdrawal participation in Afghanistan was never sorely tested. The lack of urgency regarding the safe evacuation of Afghans who facilitated the US war effort indicates it would have followed the same course as the Obama administration in Iraq.

America's post-9/11 foreign policy delivered some significant achievements, the most notable of which was the averting of a major international terrorist attack on the United States. However, these key achievements come with a hefty tactical, economic, and human cost, including the emergence of a series of conflicts and foreign affairs disasters that do not seem to be resolving anytime soon.